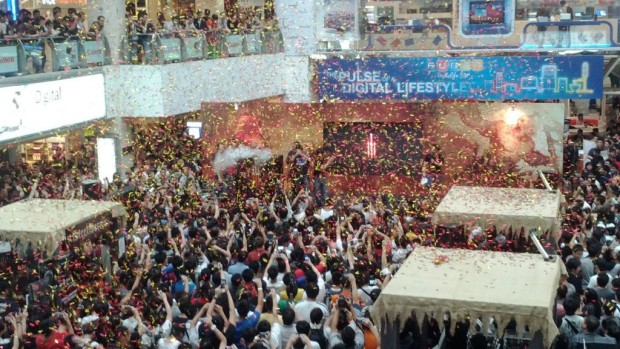 The 11-year wait (not 12 years — Lord of Destruction was released in 2001) is finally over. The Gates to the Burning Hells were reopened yesterday, at the official Asiasoft launch of Diablo III in Funan DigitaLife Mall. There was a lot of queuing, cheering, and… a giant shower of confetti after the D3 countdown ended at 3pm.

I know, I know. Confetti. Sorry, purists of the Burning Legion, but I don’t think Asiasoft could afford to splatter us with the blood of a thousand virgins at Funan. So we’ll just have to make do with that.

My workplace is a two minute walk away from Funan, and when I arrived at 8.30am, there was already a substantial queue in front of the counters, stretching towards the entrance lobby. By 10:00am, that queue had already multiplied, forming up all the way to the outside of the building.

Unlike IAHGames’ launch event for StarCraft II back in July 2010, the end of the queue for D3 didn’t stretch all the way towards Peninsula Plaza. There was better crowd management this time, with many Asiasoft marshals placed outside of Funan to ensure that the queues would not disrupt members of the public who were passing by.

If you did not have time to make it down to Funan, or simply did not wish to pile up with thousands of other fans, I’ve managed to snap some photos of the event for you viewing pleasure. Enjoy!

The author took his confetti shot from Level 2 of Funan, at the Dell store. He did not purchase, and is currently not interested in playing Diablo III for his own personal reasons.