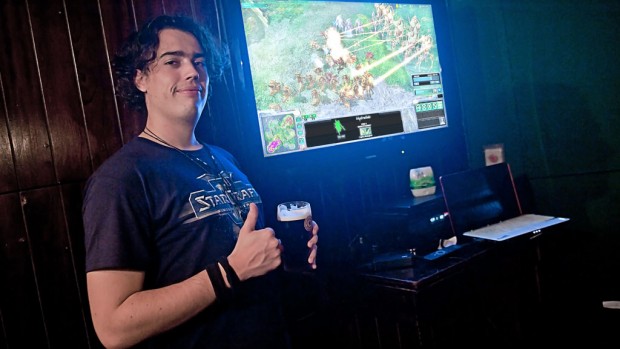 Singapore’s second BarCraft  — a gathering to watch StarCraft II in a bar — will be once again be held at Molly Mallone’s Irish Pub on Saturday.

Organised again by Alexandre “Frogmite” Dumont, the BarCraft will start at 4pm and end at 1am. You’ll have to bring S$10 per person for the food platters if you’re attending.

BarCraft is a mix of the words “Bar” and “StarCraft” and is an event at which people hang out at a bar to watch competitive StarCraft II games, drink beer and have a good time. If you don’t think that is cool is hell, then you are in the wrong place, and must have stumbled on this page by accident.

The match that will be watched this weekend is the Global StarCraft League (GSL) Code S grand finals, the highest division of the biggest StarCraft II tournament in the world, held in South Korea.

Jung “Mvp” Jong Hyun and Park “Squirtle” Hyun Woo will be facing each other in a best-of-seven series for prize of 50 million won (S$54,200).

A Terran player, Mvp has won three previous GSL championships and was arguably the best player in the world at one point in time. His form has fallen off since then, but Mvp will look to reclaim the title of “best in the world” and make history by taking a forth championship.

Standing in Mvp’s way is Squirtle, a Protoss who has always been a strong player but has been unable to show winning results. But Squirtle has been playing better than ever recently and looks ready to win his first championship.

All this happens against a backdrop of balance woes. Many players have spoken about the difficulties Terrans face against Protoss, and the game makers themselves have admitted that Protoss armies are stronger than Terrans’ in the late game.

Many will be watching this Saturday to see Mvp attempt a fourth championship win, as well to see what the once-upon-a-time best player in the world will do to deal with the advantage Protoss seem to have in this matchup.

The match this Saturday looks like it will be one of the best StarCraft II finals ever. Also, beer makes everything better.

Too much text? Don’t feel like reading all that? Look here for the details!