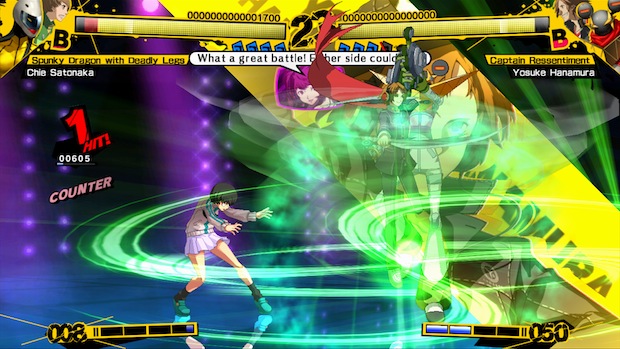 Persona 4: Arena, the upcoming 2D console fighter developed by Arc System Works and published by Atlus, will be a region-locked title on the PS3. The news was revealed by an Atlus staff posting on their official Atlus USA forums, in response to a query by a forum member.

This makes P4:A the first PS3 title to be released with region-locking ever since the PS3 was launched back in November 2006.

Siliconera has received confirmation from Atlus that although the game is region-locked, the online servers are not. Players from different regions will still be able to play online versus matches against each other.

No specific reason was given by Atlus as to why they suddenly decided to implement region-locking, but speculation is brewing that Zen United,  the European publishers of P4:A, are involved somehow. The Atlus staff member’s reply can be viewed below:

Sorry for the delayed confirmation, but yes, the PS3 version game will be region-locked. I certainly can’t offer details as to why, but there might be an official response at some point.

To reiterate, our version of the game works for the North and South America regions. Also keep in mind that both the NA and JP versions have both English and Japanese text/voice options, making them nearly identical. I’m unsure of what the case will be for the EU version.

Atlus does not have a European branch, therefore their games have to be localised and published by a third-party company like Zen. Because of this, most Atlus games tend to be released in Europe months (sometimes up to a year or more) after their initial release in North America.

European PS3 owners will be unable to play the imported North American or Japanese P4:A releases (scheduled for a 26 July and 7 August release respectively), and will have to wait for Zen to officially publish the game in Europe.

No fixed date has been given for the European release of P4:A yet.

While region-locked games are nothing new (both the previous PS2 and current Xbox 360 systems feature region-locking), and will only affect those who have a European PS3, many fans are still upset and shocked by this news, and have taken to the Atlus forums to voice their complaints. Some of them have even promised to cancel their pre-orders and boycott the game.

I’d already preordered an import copy, and now I’m going to have to pay £2.50 service charge to cancel it.

I really don’t understand why they’d do this. Surely they’re going to lose a good few sales from EU customers who would have imported?

You’ve really let us down, Atlus.

Another forum member, s0meguy, explains from a fighting gamer’s perspective:

This is indeed very disappointing and I’m quite upset.

I’m in the same situation as Dantis. I’m from Europe and preordered several copies for my friends and myself and now we’ll have to pay quite a bit in cancellation fees for nothing, except getting the game later on a yet uncertain date.

Most of us even would have bought the PAL Xbox360 version of the game additionally to our imported US PS3 copies, which probably won’t happen now.

This notice took away all our anticipation we had for the upcoming month and the release of the game. We even had release events and tournies set up and planned already, which will now have to get canceled.

I’m still hoping for an official press release straightening out this mess by declaring it all a misunderstanding.

Otherwise, way to kill all the hype for Europe.

P4:A was a hotly anticipated title, both for fighting game enthusiasts and fans of the Persona series. It was released in Japanese arcades earlier on March 2012.

European PS3 owners, well, tough luck. You will just have to hope and pray that Zen releases their localised version quickly. Judging by their previous release of Arcana Heart 3 in Europe however, they seem to be more than capable of doing a good job.

For everyone else in Asia, it’s time to cancel any pre-orders you had made earlier. Better to play safe and wait until the R3 version of P4:A hits our store shelves first.