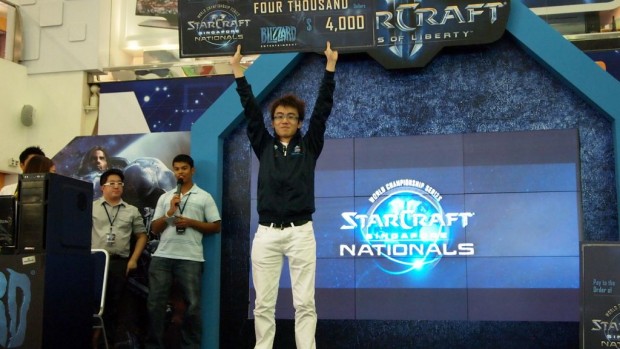 Revenant went undefeated throughout the tournament and handed Yekke a straightforward 2-0 defeat in the grand finals, which was broken up only by a faulty monitor midway through the second game in the series.

“Rev is probably one of the best, if not the best, Zerg in Singapore, so there’s no problem with losing to him, even if it’s 4-0,” Yekke said, referring to both the grand finals and the earlier winners’ bracket match the duo played against each other.

On his part, Revenant did not expect Yekke to put up the strong fight that he did.

“I think Yekke played quite well. His potential was far more than expected,” Revenant said.

Flash eSports’s Ryan “Kyzer” Low finished third after being eliminated by Yekke 2-0 in the losers’ brackets finals. The match was interrupted during each game by a technical fault. In the first game, a near-disconnect caused Kyzer to lose several Mutalisks, and in the second game there was a power outage during a major engagement, forcing a restart.

However, Kyzer said that the technical glitches did not make a significant difference in the final result, and that he got a fair result.

“I don’t think me losing my units at that point would have made a difference, because those units were actually deadweight. So other than scouting around the map, they couldn’t have done anything else. I think that was his (Yekke’s) game to win,” Kyzer said.

“When the power went out (during the second match), the engage was not favourable for me, so either way, I don’t think I could have won that.”

The top three players were all Zerg players.

The final standings are: