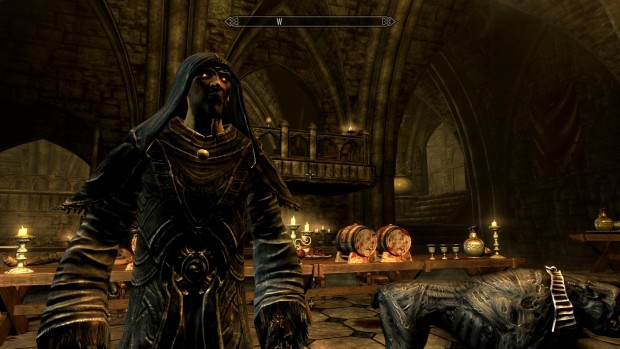 With the recent PC release of Skyrim’s first DLC, Dawnguard, I figured that it was the perfect time for me to shake off the cobwebs from my High Elf mage-in-hibernation — that I never quite finished the game with — and take him out for a spin around the frosty northern regions of Tamriel. Despite my natural liking for the game, my re-visit to Skyrim came with a painfully unnerving realisation: the protagonist is broken.

On Skyrim in general

The game remains mostly unchanged. It’s massive, beautiful, immersive, and brimming with all sorts of things for a player to do and discover. If you remember the review I wrote for Skyrim in December last year, I gave the game two thumbs up and above. Fast forward about eight months later and I have to say, the game’s still pretty awesome, if not better, after the slew of patches and improvements Bethesda have implemented.

A little bit about Dawnguard

Dawnguard places you neck deep in a secret war between an ancient clan of vampires and the Dawnguard, a forgotten group of vampire hunters. As with most RPGs featuring two factions, you’re forced to pick a side and bring the agendas of your new-found “allies” to fruition.

While I won’t call this DLC pack amazing, it still isn’t outright terrible or a waste of money. Although the vampire faction’s questline was interesting enough (I wasn’t drawn to the Dawnguard faction at all), becoming a Vampire Lord — one of the major attractions in the DLC — was quite a downer. I mean, come on, you turn me into a giant-monster-bat-sorcerer and I actually turn out weaker than my mortal form? Sure, thanks.

I found the scenery and environments for the newly created DLC areas to be stunningly beautiful, and while most of the DLC’s “all-new” creature enemies were stale and behaved much like any other enemy creature we’ve already seen in our hundreds of hours of Skyrim game time, the boss fights and scripted encounters were pretty awesome.

It’s a decent add-on, although it definitely falls short on the promises that Bethesda has been promising ever since Skyrim first hit store shelves. On a scale of 1 to 10, I’d give it a 5.5, maybe a 6.

And now we finally reach the crux of the matter. As mentioned, Dawnguard has you choosing between two factions, a clan of pompous and self-absorbed bloodsuckers of the night and the has-been motley crew of vampire slayers that is the namesake of the DLC.

So there I was, standing before Lord Harkon (he’s the head honcho of the vampires in Dawnguard), contemplating the pros and cons, role-playing or otherwise, of aiding either faction.

Just as I was about to make my decision, a sordid realisation hit me — like one of those highly annoying swing-at-your-face spiked traps the game so loves to hurl in your way — the Dragonborn is a TERRIBLE main character.

I might get some flak for this but I’m not kidding. You see, one of the biggest appeals of Besthesda’s RPGs over the years is your main character — he/she starts off as a nobody with a slate so clean that you could eat off of it. You are free to create your own path in your given world, to forge your own legend and choose the manner of legacy you wish to leave behind — yes, it all sounds extremely “role-play” (RP) and all, but hear me out here.

In Skyrim, you are given the same luxury. You start off as a prisoner, a classic Bethesda go-to plot device, and from the moment you earn your freedom, you’re free to shape your character and adventure as you like. Here lies the problem — you’re NOT just a prisoner, you’re the flipping Dragonborn! Almost right from the beginning, the game smothers you with that fact — you’re an individual shaped not by your deeds but by your birth, up and above the mortal likes of any NPC you encounter in the game. With every step you take, in some way or another, the game affirms your status as Skyrim’s prophesised hero and that you’ll deliver the masses from the threat of Alduin and his draconic posse. Bethesda have perhaps, done too good a job in marketing the image and likeness of the Dragonborn. Before you even take your first steps in the massive world that is Skyrim, your legend has already been carved out for you.

With Skyrim, you don’t get to start with a clean slate. The game becomes a role-player’s nightmare, especially when it boils down to making major character-defining decisions, such as a choice between two very distinct factions with highly different goals and practices. With so much riding on your status and reputation as the Dragonborn, the one true hero meant to deliver Skyrim from all manners of death and destruction, the game creates a silent and subtle obligation for you to play to the stereotypical image of a Dragonborn anyway — the burly Nord poster-boy we’ve seen in countless trailers and screenshots. Because of that, the game loses it’s quintessential create-your-very-own-story quality.

I’m sure my explanation above isn’t something that will resonate with all Skyrim players, but for someone (yours truly) who gets deeply invested in a game’s narrative, congruity, and the role-playing motivations that drive his character forwards to victory and beyond, the status of the Dragonborn has become some sort of a stigma. I don’t know if anyone else feels the same way or has written about it before. But I’m still beating myself up over how it took me so long to come to this conclusion. Looking back, it does explain why I’ve never been able to re-visit Skyrim as a new character in its entirety without feeling a sense of detachment. In terms of the games’ many varied factions, it also does explain why being branded a member of the Thieves Guild or a Mage of the College of Winterhold has always irked me.

Ah, woe is the Dragonborn.

Will I ever play Skyrim again? More than likely. Like I said, it’s still a pretty decent game overall. Also, I believe that Skyrim — with all its mods, patches, DLCs — is just one of those games that’ll remain at the top of many fans’ list of games to play for a long time.

Mod brings Skyrim and its Dragon Shouts to Kinect

More than Skyrim, it’s all of Tamriel