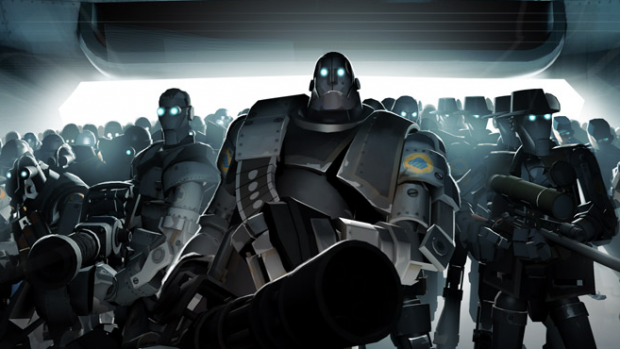 Team Fortress 2 (TF2) is the gift that doesn’t stop giving. After years of giving us consistent updates, entertaining “Meet the Team” videos, and most importantly, hats, Valve has announced Mann vs Machine (MvM), a co-operative “horde” mode where teams of six can take on the machine scourge.

You can view the official MvM teaser trailer below:

If you have been following TF2‘s backstory on Valve’s TF2 blog, the premise involves two brothers, Blutarch Mann and Redmond Mann, fighting over pits of gravel. Mann vs Machine introduces a third Mann brother, Gray Mann, whose idea of a family reunion is unleashing a robot army to claim their family’s birthright. Two comics (Blood Brothers and Fate Worse Than Chess) detail the story so far.

From what has been revealed on TF2’s Mann vs Machine webpage, we can expect to see robotic doppelgangers of our favourite TF2 classes. The Heavyweight Champ robot mimics a KGB-wielding Heavy, while Minor League Scout is a bat-swinging, baseball stunning maniac.

There are even mini-bosses that increase in strength if you don’t take them out quickly enough. You can check out what you will be up against here. And of course, there is the promise of loot (more hats?!), which will be revealed in the next two days

It all sounds like TF2 meets L4D. With hats. Consider me sold. I am putting on my best gear and heading to the battlefield with five friends when this patch drops Thursday (Singapore time).

Did you know that Mann vs Machine has been hinted at for nearly two years, with easter eggs being placed in various TF2 maps and videos? This fan video shows us all the clues: