After several weeks of previews and teases on the official Diablo III blog, the latest 1.04 patch for Diablo III (D3) has just gone live for the US region today. There are lots of major changes, and you can view the full changelog here.

For those of us living outside the US, here’s a quick summary of what to expect while waiting for the patch to hit your region:

For players who crave for more character progression after hitting the level-60 cap, the new Paragon system allows your character to continue earning bonuses towards their core stats, Magic Find, and Gold Find. There are 100 new Paragon levels to be earned, which can be obtained by completing combat challenges (such as Killing Blow and Massacre).

Another big change are the tweaks to monster hitpoints (HP) on higher difficulties and co-op. Responding to the complaints that Champions in Inferno felt like impenetrable brick walls, the HP of Champions and Rares have been reduced by 10-25%, and Champion prefixes have also been adjusted. That means no more ridiculously frustrating Fire Chains. (CURSE YOU FIRE CHAINS!)

At the same time, normal monsters will have their health increased by 5 to 10% in Inferno, but this will be accompanied with a four-fold increase of the likelihood that they will drop a magic or rare item. Hopefully it will be easier to obtain that resistance gear you so desperately need to survive in Inferno.

Weapon drops now have better stats. Most of the time, players are able to take a simple glance at an item, and know instinctively that the item is crap even before identifying it.

1.04 has changed this by giving these items a “fighting chance”. With 1.04, raw weapon damage value on all level 61 and 62 weapons will be able to roll damage that extends all the way to the top end of level 63. Two handed weapons will also be improved with better suffixes to offset the loss of not equipping an additional off-hand item.

One of the biggest complaints in D3 was that Legendary items didn’t feel Legendary enough. In 1.04, the game will be adding special effects to show off how epic these items really are.

Aside from the cosmetic effects, Legendary items will also special combat effects, similar to the affixes that Champions and Rares have. Legendaries now have a chance to summon Demonic Slaves, call for Angelic Assistance, or charm enemies into assisting you on hit. The buffed Skycutter below is what you can expect in 1.04 when it comes to Legendaries. 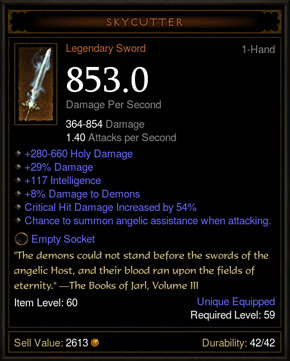 In addition, Legendary items will allow for unique character builds that are normally unavailable. Ever wanted to play a feasible ranged-Barbarian or melee-wizard? With the right Legendary items, now you can.

However, the buffs for these Legendary items will only take effect for new Legendary drops after the patch. This means your existing Legendaries will not be upgraded when the patch drops. Bummer.

There are also tweaks made to all five player classes. Generally, skills be will updated to encourage gamers to play around with a variety of skills, instead of relying too much on one skill only.

Demon Hunters, Monks, and Barbarians will see their core resource spending/generation skills modified. Witch Doctors can expect their pets to survive better in difficulty levels. And Wizards will see other Hydra variants being buffed to counter their over-reliance on Venom Hydra.

There is a whole lot more behind the class tweaks, so if you want more details, be sure to read the respective blog posts for each class: