Last weekend, the Diablo III (D3) community was lit up when several D3 developers from Blizzard posted some angry Facebook remarks in response to an interview conducted by Diablo IncGamers, a popular Diablo community website.

The interviewee in question was David Brevik, the man responsible for creating the Diablo series, and who is also one of the original co-founders of Blizzard North. Brevik gave his honest criticism of Diablo III, highlighting some of the mistakes and differences in design decisions that the current D3 development team had made.

IncGamers: Do you think they bought the wrong people in? As we understand, Jay Wilson, for example, his background was RTS. From our point of view it looked like they misunderstood what kept people playing, The type of loot drops, which has been a big issues. One of the other issues is they have not listened to their community, and they have not analysed what makes up that addictive Diablo  experience. What are your thoughts on that?

David Brevik: Well, the loot system. They made some decisions with the loot system that were very different than the way that we did it in Diablo 2 and I think that obviously the community has been upset with some of the decisions they made. Having all of your powers work off your main weapon and things like that, to having blues that are more powerful than yellows. Eventually the auction house and how that worked, even something as simple as when you equip an item and it’s bound to your character permanently would  have totally changed the dynamic  of the game.

It seems odd that they have not really responded in a quick fashion to some of these things. I think they are very well aware of the problems at this point and are trying to fix some of this stuff. It’s a shame that they had to learn some of these painful lessons.

The controversy started the next day when a Facebook exchange among the D3 development team was spotted by an anonymous reader, screencapped, and submitted to Diablo IncGamers.

Chris Haga, technical artist for D3, responded to the interview by saying that he felt like he was being “thrown under a bus”. Jay Wilson, game director for D3, posted a more blunt reply: “Fuck that loser.”

You can view an edited screencap of who said what below (taken from this Diablo III Reddit): 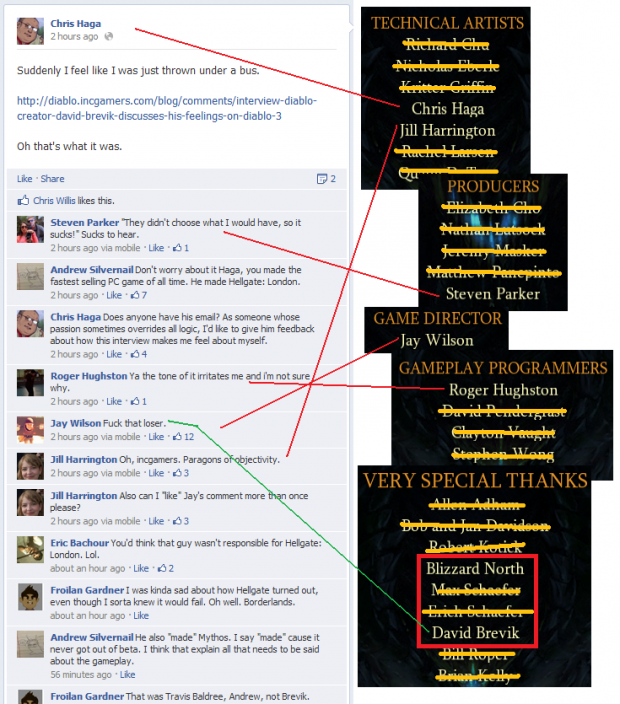 Three days later, Wilson has posted an apology on the Diablo III Battle.net forums. His response is incredibly long, undoubtedly influenced and edited by Blizzard’s PR department. But he is basically saying that he is very sorry for his actions, which spawned from a passionate desire to defend the hard work that his team has put into the game.

Still, this has not stopped Wilson’s “Fuck that loser” quote from becoming an overnight Internet meme, and is yet another robust reminder about the perils of social media and Facebook: always be mindful of what you type out for the world to see. And when in doubt, just keep your mouth shut.