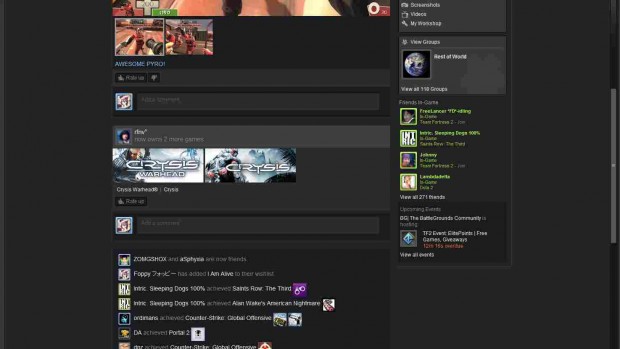 Valve’s latest Steam Community update, released a couple of days ago, adds some much needed social networking improvements in today’s age of Facebook and Twitter. You can read the full details on the official Steam Community page, but here are some of my thoughts on the update.

The Community tab is now split into several smaller sub-tabs. The Friends tab functions like Facebook’s status updates — you can configure your status feed to display everything from screenshots your friends have posted, new games they’ve bought, achievements unlocked, group announcements, and so on.

One minor nitpick I have, is that there’s no way to sort your friends into Facebook-style “Lists” or Google+ “Circles”, so if you have a large number of friends who are very active on Steam, your feed might become very unwieldy to read.

Another new feature is the ability to assign your friends custom nicknames. Unable to recognise those pesky friends that keep changing their handles and avatars? Just give them a custom nickname, and you’re set.

The best new Community update, of course, are the Game Hubs. Think of them as Facebook Pages for every Steam game. For the lesser-known titles, especially indie games, Game Hubs are a great way to meet other like-minded players and share screenshots, videos, and discussions.

Note that most of the Game Hub features have been added to the old Steam Groups as well — group pages are now neatly sorted into different tabs such as Announcements, Events, Members, and Comments.

Oddly, the “My Steam Groups” function has been left out of the Community tab, and must be accessed via My Profile > My Groups at the top menu. This is a strange oversight, considering that Steam Groups are technically the predecessors to Game Hubs.

Rounding up the rest of the Community update are the Steam Workshop and Steam Greenlight, both now out of beta. Check them out of you’re interested in mods and indie titles.

Now Valve, the only thing missing from Steam right now are the old mini-games that you could play with your friends. You see, a long, long time ago, I remembered playing stuff like Checkers and Chess on Steam chat. Bring them back, pretty please?

A quick dissection of Valve’s updated Steam Subscriber Agreement: what does it really mean?