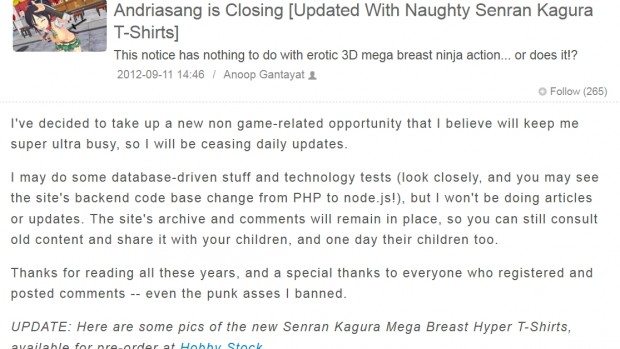 The closure of Andriasang earlier this week came as a shock to many gamers, especially those invested in Japanese videogames. Andriasang was always the first to report about the latest, translated gaming news from Japan, and generated a strong following of readers who posted frequently on the site’s comments section.

It’s not the end of the world, however. There are quite a few alternatives on the web, and while they might not share the same timeliness and conciseness as Andriasang, they should still be more than sufficient to cover your Japanese gaming needs.

Siliconera
A mainstream gaming site, but with a sizable amount of coverage devoted to Japanese gaming news, especially for visual novels and videogame tie-ins to popular anime titles. If you only have time to browse one site, it should be Siliconera.

Gematsu
An alternative to Siliconera, its coverage is leaned more towards the PS3 and Xbox 360 systems.

SGCafe
Yes, Singapore’s much maligned SGCafe has improved tremendously in recent years. Although it’s main focus is on anime, there’s a lot of Japan-related gaming news, pertaining especially to videogame release dates in the Southeast Asia and Hong Kong regions.

Rest in peace, Andriasang. You will be sorely missed.

We’re going back to our competitive gaming roots