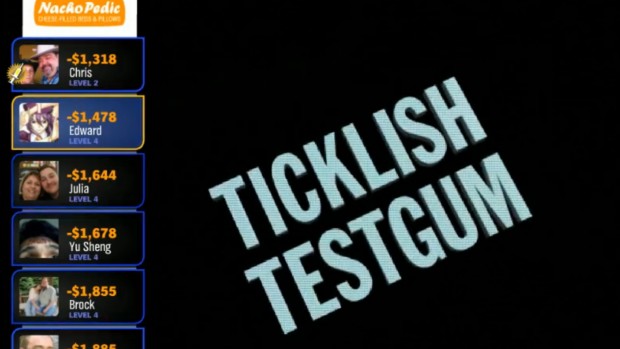 It’s the Jack Attack segment, You Don’t Know Jack’s version of fastest finger first. The question “Tic-tac-toe” appears, asking me to match it with the correct answer. As I wait patiently for the right response (“match three in a row”, of course), the phrase “tick the tacs” flashes. Immediately, two of my friends buzz in with their answer, losing $1,000 each, and I am left laughing out loud in tears. Ah, the classic YDKJ trap question.

There are two types of Facebook games: the ones that force you to spam your friends with invites in order to make progress (I am talking about you, Sims Social), and the ones that make you come back every day in order to beat the daily high score (Robot Unicorn Attack). The Facebook version of YDKJ falls into the latter, and is a rare example of how a long-running retail franchise actually plays better on a social networking platform. 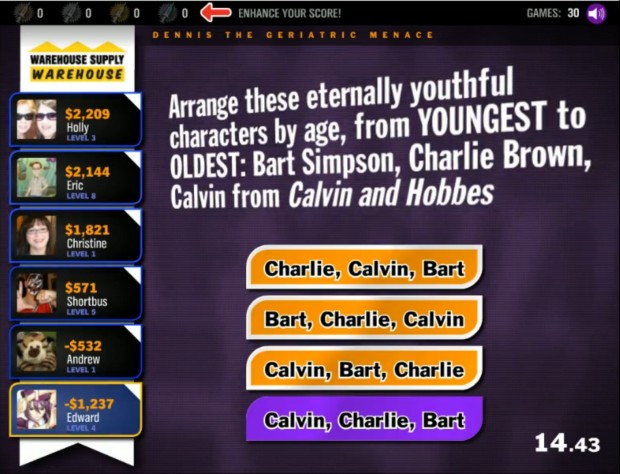 Let’s face it, how many of us have actually played a proper full-player match on the old retail versions of YDKJ? It’s logistically difficult to bring like-minded friends together at the same time to play an irreverent trivia game, and if you’re playing the console versions, not every gamer has enough controllers for everyone.

YDKJ for Facebook solves this problem with its clever use of asynchronous multiplayer, and by making the game much shorter. Each Facebook trivia episode is only five questions long, and can be completed in about five minutes. This new system has its pros and cons. The staple “screwing” feature of YDKJ (forcing an opponent to choose an answer), has been removed. In exchange, the “Gibberish Question” makes a return (previously impossible on the console versions), and the Jack Attack sequence now allows any number of players to obtain the correct answer. 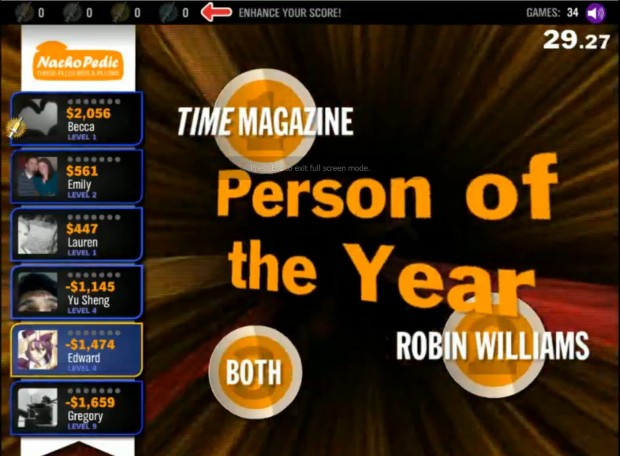 Even if you can’t find enough friends, the game fills up the missing slots with credible AI opponents, which is a first for the series. It’s entirely possible to enjoy the Facebook game by yourself without any friends, but you will be missing out on one key aspect: gamesmanship. Want to brag about your high score to your friends? Share it on Facebook! The game even has a few achievements that deliberately require you to post your scores on each other’s walls.

A recent September update gives players an incentive to perform well: you can now earn game tokens based on your performance. These tokens can be used to purchase the aptly-named “performance enhancers” to boost your score during a match, as well as extra games. All players will automatically earn a free game each day, but if you want to play more than once per day, you need to purchase them with tokens. Free-to-play gamers can slowly build up their tokens through continuous play, while pay-to-play players can purchase a lump sum of tokens at one go. It’s a fair and balanced system that gives no clear advantage to paid players: they simply can play as many games as they want, whenever they want, but all content is still fully accessible to both F2P and P2P. 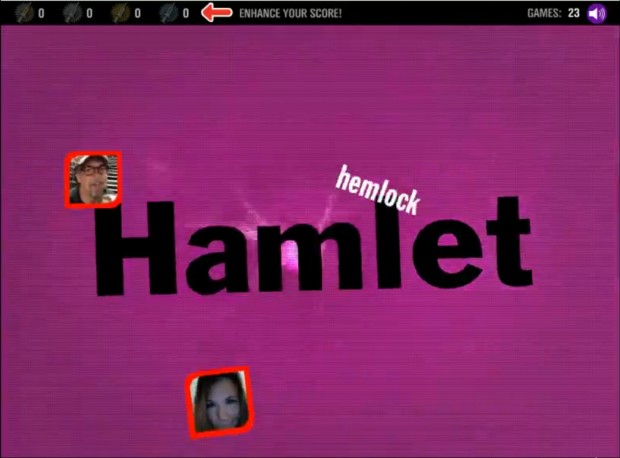 The Facebook platform also allows the developers, Jellyvision, to produce faster and smoother updates. About two to three new episodes are released each week, ensuring that even paid players will never run out of fresh content to play. Some of the new questions are based on recent current affairs events (eg. Snoop Lion, the London 2012 Olympics, Mitt Romney), which should be an incentive for everyone to always stay updated with the news.

YDKJ Facebook’s only drawbacks are its frequently America-biased questions. One particular Jack Attack requires you to match the names of American theme parks with their geographical locations AND American state codes. Seriously, these type of questions are impossible for non-Americans like myself to answer. 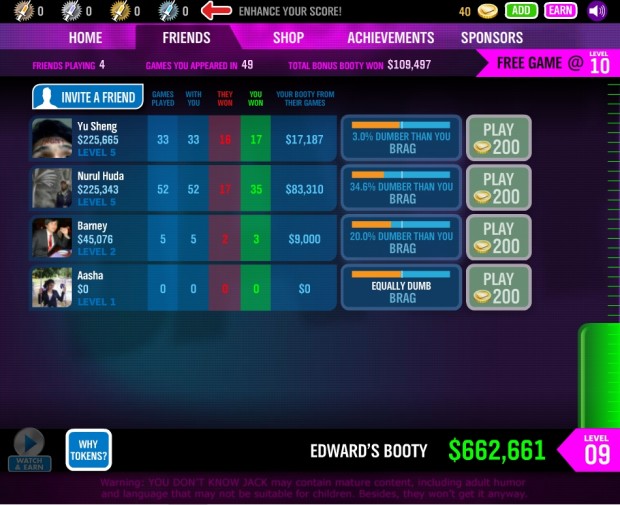 Still, this Facebook iteration of a beloved series is unquestionably its best version yet. True to its name, after each match I found myself frequently googling and searching Wikipedia for the answers to my failed questions. A game that is hilariously fun and entertaining, playable in short bursts, frequently updated, and actually makes you learn something? YDKJ isn’t just the best Facebook game of the year, it’s what a Facebook game should be.

If you have a Facebook account, you can start playing You Don’t Know Jack here. It’s free.

Author’s edit (26 September): Corrected some mistakes regarding the history of YDKJ’s features, and the maximum number of players for the older versions.