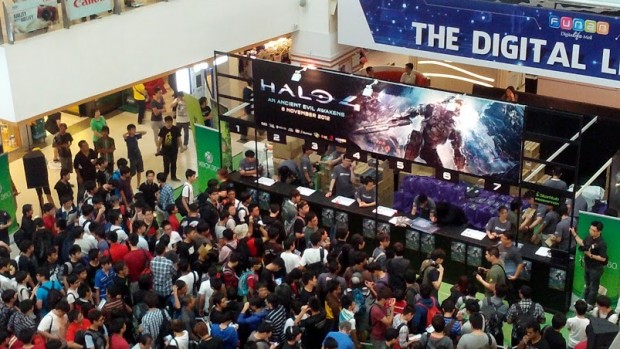 I have been out of touch with Halo for years: I played the first game when it was ported over to the PC in 2003, and that remains my only experience with the series because I never owned the original Xbox or Xbox 360 consoles. So imagine my surprise when I walked into Funan DigitaLife Mall for lunch on Tuesday, and was greeted by a large queue near the central atrium. That could only mean one thing: it was launch day for a videogame, and it had to be Halo 4 because of the Master Chief cosplayer standing near the escalator.

While the crowds on Tuesday were nowhere near as big as Diablo III’s launch back in 15 May (seriously, why are all games released on Tuesday?), it still attracted a sizable amount of die-hard fans.

One such fan, Jehangir Aziz, a 19-year old Malay student, started queuing at the start of the line since 7am on Monday morning. His marathon 30-hour wait ended at 1pm on Tuesday, when the game was officially launched after a countdown, and gamers could start collecting their pre-orders.

There was also a Halo 4 multiplayer deathmatch tournament held at 2pm, with a top prize of S$2,000 for the best player. According to SGCafe, there were over 500 participants that took part, and it was eventually won by Jose Miguel, a secondary four student.

The best part about the whole event? Minutes before the game’s launch countdown started, the emcee approached a fan in the queue, asking him about a book he was so engrossed in reading.

“This book is the tie-in novel to Halo 4. It explains what happened to the UNSC [United Nations Space Command] after the end of Halo 3, and why the Covenant created all the ringworlds,” he said.

I was giggling non-stop, because this fan reminded me of the World of WarCraft red shirt guy.

You may not like Microsoft, and you can argue that the Halo series has become an annual cash cow to milk Xbox 360 players. But you cannot deny that Halo has some of the most dedicated, passionate, and simply adorable fans.

Halo 4 is an exclusive Xbox 360 title. It is currently selling at a recommended retail price of S$69.