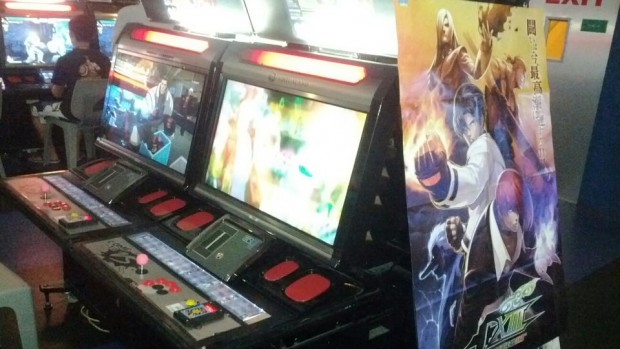 Early during Wreck-It Ralph, the game characters from the Fix-It Felix Jr machine explain what happens when an arcade machine malfunctions beyond repair: the cabinet gets unplugged, and the characters are relegated to a videogame purgatory, out of job, and never to be remembered.

I am sure many gamers have played arcade games at least once during their childhood, especially during the 80s and early 90s where arcade games were still at their peak. Have you ever wondered what happened to those games when nobody plays them anymore, or when the machine breaks down? Yup, the machines and characters from those games vanish forever, never to be remembered.

Yes, I know of the existence of arcade emulators like MAME, but that is completely missing the point about the arcade experience. Imagine watching a World Cup soccer match live on television. Now imagine watching that same match at the actual stadium venue. Obviously, being at the actual location is the superior experience: the atmosphere, the energy, and the ability to socialise in-person with friends and strangers is something that can never be replicated at home.

The arcade, much like a LAN cafe, is where you go to meet-up with your friends, and have fun socialising over videogames. But at the end of the day, the working order of the game machines is what matters most. Who visits a LAN cafe when the computers there are broken and unplayable?

The point I am trying to make now with this article, is that here in Singapore, I have seen some incredibly inconsiderate arcade players who would not hesitate to disrespect and inflict damage on the arcade cabinets. From compulsive button mashers who smash, rock, and roll the cabinet like no tomorrow, to the angry uncles that bang their fists on the cabinet and buttons each time they lose. Wilson “Tetra” Chia, Singapore’s renowned World Cyber Games representative for Dead or Alive 4, once posted a photo on his Facebook page showing the results of a superkick to a cabinet monitor: 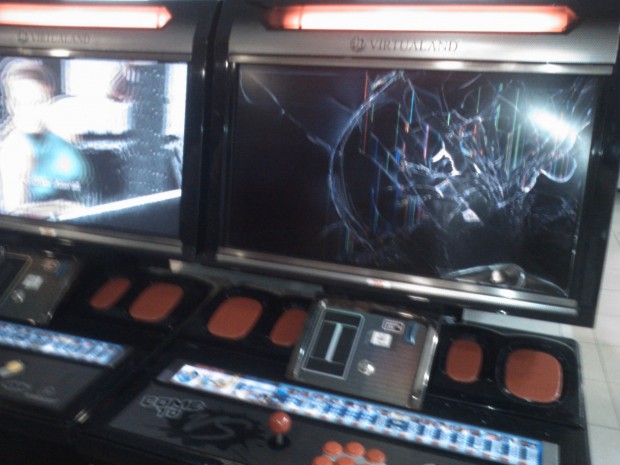 The cabinet above belongs to Super Street Fighter IV, so fortunately, the immense popularity of the game allowed the machine to be repaired in no time. But what if it was a less popular game? What if it was Melty Blood, Marvel VS. Capcom 2, Guilty Gear, or some other older and lesser played fighting game? Any damage an arcade machine sustains, is a potential death sentence not only to that cabinet, but to the community that plays it. If a machine is not working properly, and the damage goes unreported, nobody will play it anymore.

Most arcade establishments will perform an end-of-the-day bookkeeping of all their machines, checking how many credits were actually inserted into the cabinet. This bookkeeping process is very important because it tells the arcade operator which machines are actually bringing in money, and which ones are just collecting dust. Whenever the arcade decides to bring in a new game, but is short on space, the first games to go are obviously the ones which don’t make money. They vanish forever.

Of course, no one can keep track of a machine 24/7 and prevent aspiring Shawn Michaels wannabes from superkicking the monitors. So the next best thing we can all do, is to perform frequent checks on it. If you’re passing by your favourite arcade during your commute, or having a lunch break close to the area, why not just pop in for five minutes for a quick check? Even better, assign a weekly gathering date for members of your community to meet up and play the game. You get to check up on the condition of the machines and put in more money to support the game.

Here are a few more specific tips for looking after your machines:

1. Keep a copy of the arcade’s customer service contact number and e-mail address
When things really go wrong, you at least know who to get in contact with. Most arcades should have an official website or Facebook page, and their contact details can be obtained from there.

2. Make acquaintances with the service assistants and technicians
I’ve had the misfortune of speaking with some truly incompetent and worthless arcade staff, but at the end of the day, you still want these people on your side. If a machine has a faulty button or joystick, raise the problem to the staff nicely. Most staff members should know the basics of repairing loose button circuits.

If it’s a problem that is beyond their ability to repair (eg. a faulty card reader, faulty monitor display), make sure that you get the staff to raise the issue to their higher-ups or senior technicians. Do not allow a problem to fester and go unfixed for a long period of time. This is where having the arcade’s customer service contact number is useful: some staff members are simply too lazy and don’t give a damn, and this allows you to skip the chain of command and speak directly to someone important.

And if you do manage to make friends with the staff, it’s a great way to ensure that your problems will get fixed ASAP.

3. Check everything on the machine
The buttons and joysticks aren’t the only things you should be checking. Make sure the card reader or coin chutes are working; ensure the game is using the correct button layout; make sure the monitor is using the correct resolution; and so on. Also, very simple things like clearing the machines of any trash, drink cans, and ensuring that there are seats for all sides of the cabinet.

Before we start lamenting about how our favourite arcade titles are dead and no longer played, ask yourself this question: how much have you done to keep your community alive? Arcades have been on a steep decline in recent years, especially with the huge uptake of console and mobile gaming. But that does not mean that we have to sit back and let them die. We can keep them alive for as long as we can by respecting the machines, taking good care of them, and supporting them with our wallets as much as possible.

If Fix-It Felix Jr can survive for 30 years, what’s stopping other arcade games from doing the same? Arcade players have a lot more power and influence than they think.

Image of the broken cabinet monitor credited to Wilson “Tetra” Chia, taken from his Facebook page.

The author still has a personal agenda against button mashers, and will not show any compassion to players that deliberately inflict damage on arcade joysticks and buttons.