The NPCs in Borderlands 2 are characteristically insane, psychopathic, or both. From the schizophrenic Patricia Tannis, to the villainous and heartless Handsome Jack. Even the heroes from the original game are not safe: Mordecai is a sharpshooter who inexplicably becomes a better shot when drunk, and Brick is a bandit leader who enjoys seeing his own minions get slaughtered for the sake of entertainment.

Which is why Tina Tina is the sort of NPC that would only work in a game like Borderlands 2: she’s insane like the rest of the cast, something that the game has successfully conditioned us to expect from the roughly 10 to 15 hours of play it takes to reach her. “We are all broken,” explains Tannis during the “Minecart Mischief” sidequest in the Caustic Caverns. The inhabitants of Pandora have started to lose hope, their minds broken, their mental degradation a form of escapism from the harsh realities of being trapped on the planet.

And at the same time, Tiny Tina immediately stands out because of her age and sex: she is the first child we physically come into contact with in the entire series (not counting the child narrator that accompanies Marcus during cutscenes). Any parent, or aspiring parent like myself, will immediately emphatise with her: what the heck is a 13-year-old girl doing on Pandora, playing with explosives, all alone by herself fighting bandits? Where are her parents?

Or, in the case of Mike Sacco, creative developer for Cryptozoic Entertainment: why is she speaking in racist black slang?

I am not an African American, and I don’t live in America, so I cannot comment directly on the sensibilities of Tiny Tina’s slang. But I live in Singapore, a country with a multiethnic and multicultural society, made up mostly of Chinese, Malays, Indians, Eurasians, and Caucasians. Our country’s brand of “Singaporean English” slang (known colloquially as “Singlish”), which is basically a mishmash of broken English, Mandarin dialects, Malay, and Tamil, has actually been featured in a videogame before.

Want to know how a Singlish accent sounds like? Take a look at this video for Just Cause 2, featuring dialogue from a character named Bolo Santosi:

Of all the Singaporean friends and family that I have shown that video to (gamers and non-gamers alike), none of them were offended by Santosi’s portrayal and dialogue. Was Santosi’s character stereotypical and slightly racist? Most definitely, yes. But do we Singaporeans and Southeast Asians have to feel offended by it? Of course not. Singlish is a topic that is very dear to many Singaporeans, something that is “indelibly associated” (as Sacco puts it) with our country. We saw past the exterior and recognised the intent of the game creators: they were just simply trying to craft out some humour by borrowing our culture. Most of all, we were grateful and flattered that an American videogame would devote so much attention to our unique Singlish slang.

What’s wrong if the lead writer of Borderlands 2, Anthony Burch, decides to borrow some African American slang and culture in order to make a funny character? I for one, was incredibly fascinated by Tiny Tina’s choice of words: I’m very interested to know how the words gazongas, badonkadonks, and crunk came about. It also highlights the uniqueness and profoundness of the English language: we should be celebrating, not condemning outsiders from paying homage to the different varieties of English.

It’s no secret that Tiny Tina is one of the most polarising characters in the game, racist dialogue or not. For every player that loves her, there are an equal amount that simply despise her. Even the editors of Giantbomb — who are some of the wackiest game journalists on the Internet with a great big sense of humour — described Tiny Tina as an incredibly irritating and annoying character during one of their podcasts. This divide, I believe, stems from the hit-and-miss nature of the writing in Borderlands 2. Sometimes it’s genuinely funny, sometimes it falls totally flat. Not everybody likes the same jokes. 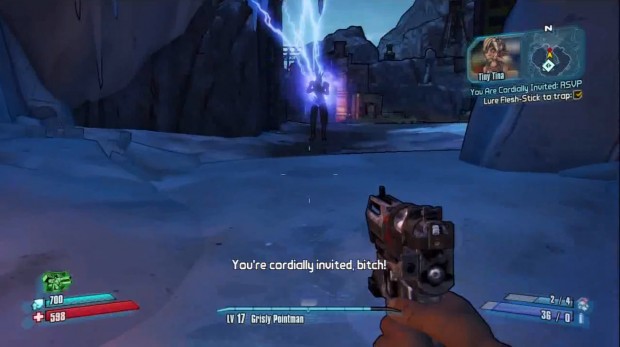 For example, I am probably the only gamer in the universe who finds Handsome Jack’s “butt stallion” to be completely unfunny. I love the term, but the actual sequence in the game where Jack introduces butt stallion to the player just didn’t click with me. Especially when moments earlier, I had just completed a sidequest where we discover that Helena Pierce was brutally murdered by Jack. To force a joke like butt stallion immediately after that, felt very jarring and slightly tasteless to me.

To Mike Sacco, and all of Tina Tina’s critics, I have just one simple question to ask you: have you completed the “Doctor’s Orders” optional mission? The quest is given by Tannis after completing the “Bright Lights, Flying City” main quest, and takes place in the Wildlife Exploitation Preserve, a location you will visit when you are level 19-24 on your first playthrough. This quest is very important to the development of Tiny Tina, and was what sold her character to me: it single-handedly explains why she’s crazy, and why she tinkers with explosives and kills bandits. For better context and understanding, be sure to also complete Tannis’s “Minecart Mischief” sidequest that I mentioned earlier.

You may still not like Tiny Tina, but all I ask is that you at least try to understand her character: a little girl raised on Pandora, who witnessed first-hand the madness and violence that thrives on the planet, and was forced to shed her innocence and survive the only way she knew how — by also becoming insane. Take a look around her workshop, and analyse the tiny details: she still plays with stuffed animals; she has figured out how to supply dynamite with power siphoned from computer motherboards; she calls Flesh-Stick the “evil bastard who murdered my parents” on a name card. The fact that she is only 13-years-old and is killing bandits on her own, and is forced to adopt her crazy persona and African American slang, makes her character startling, terrifying, and tragic all at the same time.

There lies one of the biggest problems with Borderlands 2: the game actually has strong, well-written characters and narrative, but it requires effort from the player to discover them. It’s very easy for first-timers to miss those sidequests, or simply skip the Caustic Caverns altogether (they are called “optional missions” after all). The game also has a very poor appraisal system for sidequests: apart from the XP rewards and recommended level requirement, there is no other way to tell whether the quest is worth completing or not. The mission reward icons are vague, and don’t tell you exactly what kind of item you will get until you have turned in the quest. For the gamer who is overwhelmed by the huge number of quests, or who is starved for time and simply wants to finish the main game, again, I can understand why they might miss these important bits of the story.

Dear Anthony Burch, please do not rewrite Tiny Tina. You will be doing a disservice to the fans who have already played the game, and an even bigger disservice to your sister, Ashly Burch, who worked so hard to bring the character to life with her amazing voice acting. I cannot imagine the nightmare going through a voice actor’s mind when presented with lines like “Lady’s got a gut fulla dynamite and a booty like POW” or “… off the chizzo, for rizzo”.

And dear Tiny Tina, I’m very sorry that you lost your parents at such a young age, and I’m sorry that you’re broken. But we can still be like big brother and little sister to each other, right? Let’s eat crumpets and burn some babies together.

Guide: How to play Borderlands 2 in Japanese with English subtitles (PC)

Borderlands 2 Quick Guide: tips and tricks for surviving the early levels in Pandora

Calleigh’s take on the top games of 2011