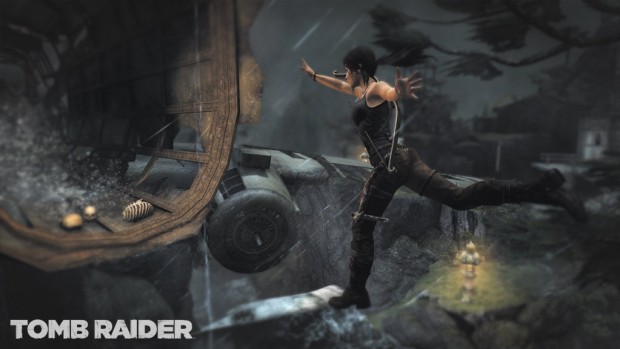 I have not played any of the earlier Tomb Raider games, except for Lara Croft and the Guardian of Light, which is a spin-off game from the main series. I did however, play all three of the Uncharted games, that big elephant in the room which Tomb Raider will unavoidably be compared to. The similarities are obvious: third-person exploration and platforming, searching for lost treasures, and massive cinematic spectacles. Really big ones.

Fortunately, Tomb Raider sets itself apart by being the antithesis to Uncharted’s summer blockbuster feel. The development of Lara’s character and her origin story is what drives the game forward, not the action. In the opening, after being shipwrecked and separated from her crewmates, we see Lara being forced to learn how to kill a deer for meat with a bow and arrow. She huddles close to a campfire, struggling to keep herself warm. It’s a simple, but poignant gaming moment. We symphatise and care about Lara not because the developers make us, but because we want to. 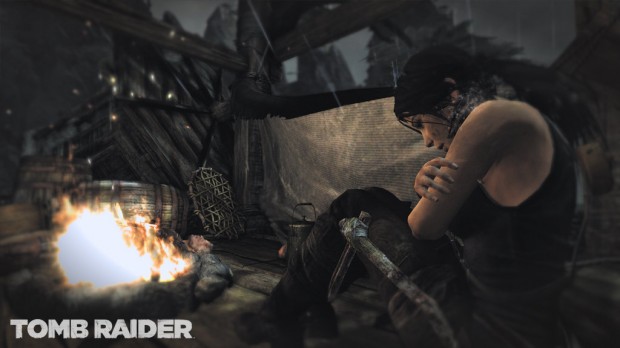 We want Lara to survive and succeed, and to avoid the many gruesome deaths in store for her. I won’t spoil them, but they leave a strong impact. Shocking and grisly enough to unsettle us, but also tastefully filtered through the use of clever camera angles and a fade-to-black screen so that they do not feel exploitative.

Within the first hour, and after being introduced to Tomb Raider’s obsessive quick-time events, Lara is forced to defend herself against the other ruthless human inhabitants on the island in order to stay alive. Starting with her humble bow, Lara eventually gains access to pistols, shotguns, assault rifles, and grenade launchers. Her melee weapon of choice is her axe tool, which doubles as a makeshift lockpick for opening locked doors and chests. All of these equipment can be upgraded by spending Salvage, the game’s form of currency obtained from exploring places and looting corpses and containers.

While the firearm weapons can be upgraded to improve stats such as accuracy and damage, the bow remains the true star of Tomb Raider. It is always a silent weapon, perfect for stealth kills, and you can intentionally fire your shots into nearby walls to distract enemies. By the endgame, your bow is able to penetrate multiple targets, shoot fire arrows and grenade-tipped arrows, and launch rope arrows (either at an enemy or over a chasm to be crossed). The slowly evolving nature of the bow mirrors Lara’s own character development, as she transforms from an innocent civilian to a hardened survivor. 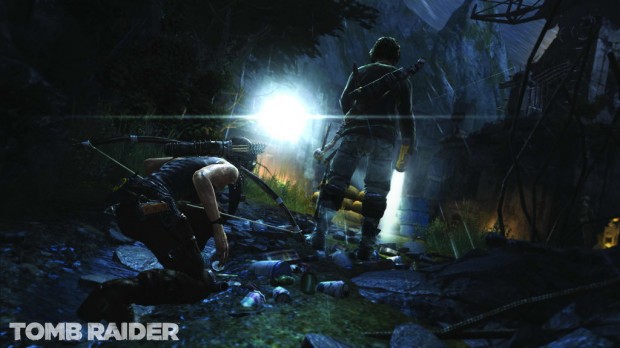 Unfortunately, there is a slight tinge of narrative dissonance in Tomb Raider, because each time Lara gains access to a new gun or weapon upgrade, the action ramps up really quickly. From killing lone stragglers with her bow in the opening, it is not uncommon for her to take on entire platoons of enemies in the later half. We discover through the game’s dialogue that Lara’s missing father was a famous archeologist, and that she learned survival skills from her mentor and shipmate, Roth, which makes sense for the early game’s themes of exploration and survival.

But how does an explorer-survivor girl suddenly become an expert, hard-boiled killer overnight? The game does provide a slightly better narrative justification for Lara’s murdering spree than Nathan Drake’s: she kills first for self-defence, and later on, to save her friends after she has discovered the true nature of her aggressors on the island. Still, there are a few unintentionally hilarious and narrative-breaking moments, like when Lara first picks up a grenade launcher, conveniently abandoned on the ground beside her. “Oh shit,” goes the baddie’s reaction before he gets blown to bits. “She’s got a grenade launcher!”, screams another shocked group of bad guys. As if they couldn’t have picked up the grenade launcher themselves (it was just lying on the floor). “Yeah, run you bastards!”, replies Lara.

At the end of the day though, it is the gameplay mechanics that matter, and Tomb Raider’s combat feels satisfying, entertaining, and better refined compared to its peers. Lara will automatically take cover behind any wall or waist-high obstacle (there is no cover button in the game), a nifty feature that I would like to see implemented in other third-person shooters. There is a dodging mechanic, similar to Alan Wake, where you have to time your dodges to the enemy’s melee attacks precisely, which will leave them wide open for a counterattack. While there are a few battle sequences that feel unnecessarily long, all prolonged fights are always followed by a respite of exploration, which is the biggest strength of Tomb Raider. 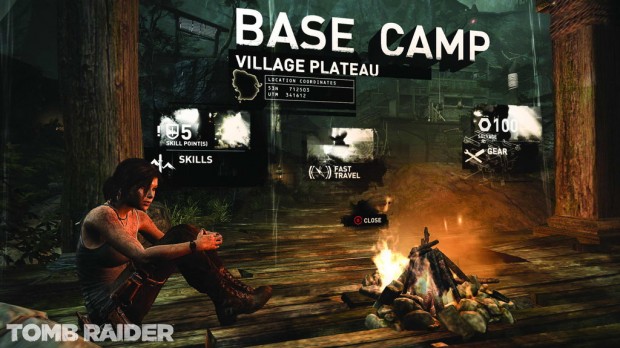 The game’s locations are divided into individual open-world hubs, and the campaign’s mission objectives are clearly marked out on your map. You can take your sweet time and ignore the main story path, and instead focus on completing the numerous side-challenges and relic hunts, which will earn you extra Salvage and XP for purchasing new upgrades and skills. Lara even has Bruce Wayne’s Detective Vision from Batman: Arkham Asylum, called “Survival Instincts” in this game. A simple button tap will highlight all nearby items and objects that can be interacted with. The Survival Instinct can be upgraded later to allow Lara to spot items hidden out of her line-of-sight. It’s an essential mechanic that encourages players to explore and figure out solutions to some of the more inaccessible treasure in the game. Most secrets require simple puzzle-solving and manipulation of physics, while others are locked away Metroidvania-style until Lara obtains the necessary equipment to progress.

The pay off is always worth it, should you devote your time to exploration. The bonus Salvage and XP is helpful, but more importantly, Lara will actually narrate and describe the importance of each item she discovers. As a person living in Asia who is currently studying the Japanese language, I found her explanations of the game’s Asian artefacts and their cultural significance to be genuinely interesting and educational. The developers have clearly done their homework, and have treated the game’s oriental and historical references with utmost care and respect. 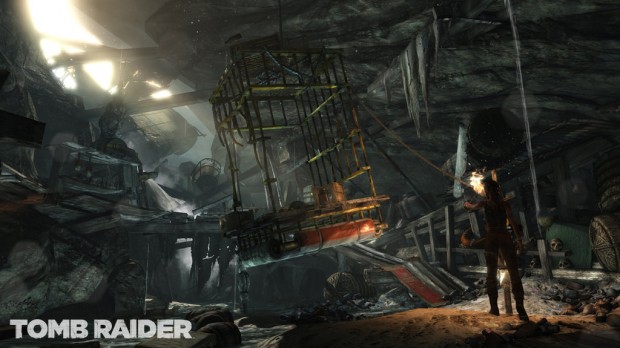 It has been more than four years since the release of the last main game in the series, Tomb Raider: Underworld. In that time, two Gears of Wars games were made, two Modern Warfare sequels came out, and two Uncharted games were released. It is very easy to spot the positive influence of those games on Tomb Raider, from GoW’s melee finishers to Modern Warfare’s XP and upgrade system.

And yet, Tomb Raider manages to retain its own unique identity thanks to its female protagonist. Ten years ago, if you asked any gamer to describe Lara Croft’s defining characteristics, the first words that come to mind would probably be “boobs”. After Tomb Raider, gamers will remember Lara Croft as a survivor, someone believable and admirable that we can all relate to. Crystal Dynamics has successfully rebooted and reintroduced the character to a new set of fans, allowing one of gaming’s most iconic heroines to be reborn again.

Eat your heart out, Nathan Drake.

The author completed the PC version of the game once on Hard difficulty, taking about 20 hours to finish the main campaign. He did not touch the multiplayer portion. The game is also out for the 360 and PS3. The PC version (requires Steam) retails for a recommended price of S$48.