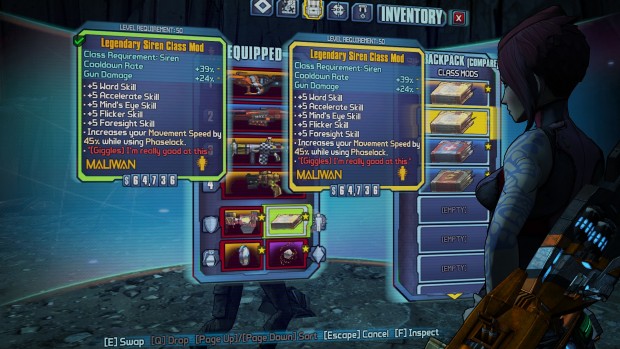 After more than 260 hours spent in Borderlands 2, it finally happened. I cheated the game and resorted to item duping. I have thought very long and hard about my reasons, and none of them are truly justifiable. I still feel quite bad about it, and hopefully by writing my thoughts down it will give me some mental closure.

Disclaimer: I will not disclose the exact method of how to perform an item dupe in Borderlands 2, because it is an act that I absolutely do not condone under normal circumstances.

If you have ever played any similar loot-dropping RPG games, such as the older Diablo II, then you should understand the concept of the loot generator, or random number generator (RNG). The drop rates for a specific unique item are usually higher from a particular boss monster — therefore if you wanted to farm for the item, you would keep killing the same baddie over and over again until you got the item you wanted. HOWEVER, getting the item to drop isn’t enough — you still had to pray that the item has good stats that were suitable for your character build.

Some RPG games, such as Torchlight II, always have fixed stats for all of their unique items. As long as it dropped, you would be getting the single, best possible version of that unique. Unfortunately, Borderlands 2 always requires you to roll for the stats of any items that drop. Combine this with the different possible elemental permutations and item prefixes, and you will very rarely see the same unique weapon dropping with the exact same stats.

The point of duping, is to replicate the best possible stats for a unique item you had. This saves you time of having to spend hours re-farming all over again and re-rolling the stats each time the unique dropped. Why is this a problem? It’s cheating, plain and simple, because you are exploiting a loophole in the game’s system to perform something that was never intended by the developers. Duped items in Borderlands 2 are actually very common — if you have ever traded for a Legendary with another player you found on an online forum, there is a very high chance that the item was duped along the way. The problem is so prevalent that a trading group was formed in the Gearbox forums to ensure that all loot traded among players in the group was legitimate.

The item that I wanted to dupe, was a friend’s Legendary Siren class mod, a level 50 Legendary item. It grants +5 skill points to several Tier 1 skills (all of them useful for the Siren), a hefty cooldown rate bonus (mine was +38%), and a gun damage modifier (mine was +24% damage). This allows Maya to cast Phaselock more often, and deal higher damage for all of her weapons. It is unquestionably the best class mod for Maya, and would be absolutely indispensable for Ultimate Vault Hunter Mode, the game’s third and hardest playthrough difficulty which we were planning to pursue.

The biggest irony of all was that the Legendary class mod dropped from a random trash mob, and not from Pete the Invincible, the boss that we had farmed for about 30+ times before that. What were the chances of another exact Legendary Siren class mod dropping (and not Legendary class mods for the five other classes that we did not really want)? It was an extremely lucky turn of events, and unfortunately, we didn’t want to waste even more time farming for a second one.

In yet another twisted sense of irony, my Maya-playing friend recently joined another three-player game with his level 10+ Gunzerker, an alternate character he has been trying to level up. The host of the game had hacked the loot drops, to the point that Legendaries were dropping everywhere, even from normal containers and chests. I was friends with one of those other three players, and immediately informed her in Steam chat that she was playing a hacked game. Her horrified response: “Aiyoh! Then like that, where is the fun?”

We all want powerful items to drop in order to feel rewarded for devoting our time to the game. And yet, if too many powerful items drop at once, the game suddenly becomes “not fun”. Human beings are such difficult creatures to please, and RPG games are so difficult to design. You need a sustainable endgame so that players will stay interested long after they have reached the max level, but if you don’t give them enough rewards, they will start becoming frustrated and eventually quit the game. This was what caused many gamers to lose interest in Diablo III after a few months, and I don’t know of any friends who are still playing it. Borderlands 2 just barely avoids this problem due to the numerous, unique item rewards from the game’s quests — you could still scrape by without Legendaries, and rely on good Blues and Purples.

I have no intentions of trading my duped Legendary Siren mod with anyone, and if me and my friend are lucky enough to drop a second Legendary class mod legitimately, I will immediately delete my duped item. But it still feels like I did something really dirty and forbidden.

Sometimes I really wonder why I bother playing videogames so seriously and passionately.

The author still thinks that the Mechromancer is the strongest and most powerful class.

An open letter to Mike Sacco and Anthony Burch: in defence of Borderlands 2’s Tiny Tina