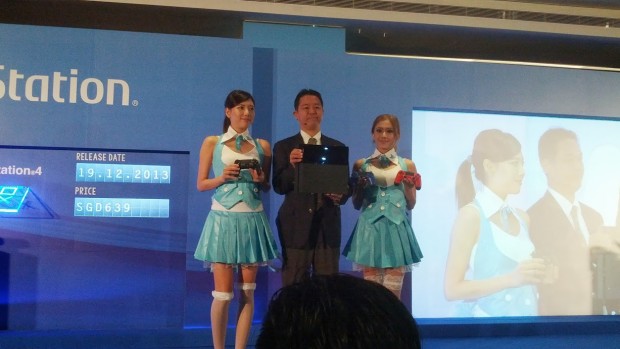 The PlayStation 4 will be officially launched in Singapore on 19 December 2013 at a recommended retail price of S$639, Sony Computer Entertainment Hong Kong (SCEH) announced today at a press conference.

The PS Vita TV’s release date for Singapore was also revealed: it will be out on 16 January 2014, and will sell for a recommended retail price of S$149. A S$219 bundle version is also available, which comes with an extra DualShock 3 controller.

Customers can start pre-ordering the PS4 at all Singapore Sony Stores and authorised Sony retailers from 13 November to 12 December. A full list of all participating outlets can be viewed in this official press release here.

No information was available for the release date and pricing of the PS4 in other Southeast Asia countries. However, SCEH did announce that a new regional warranty plan for six SEA countries (Singapore, Malaysia, Indonesia, Philippines, Thailand, and Vietnam) would come into effect on 14 November 2013. Customers who purchase a PS4 from the aforementioned countries will be entitled to one year of free repair service in any of those countries.

There will also be three additional bundles available on launch day and for pre-order, each consisting of the PS4 system and a selected PS4 title (Battlefield 4 or Killzone: Shadow Fall) or PlayStation Camera accessory. The full details of the bundles are below (click for a larger view): 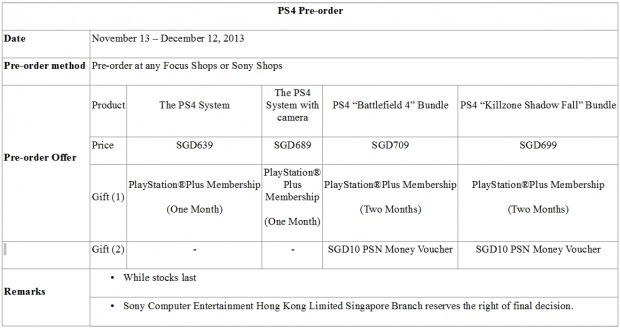 In addition, 23 PS4 titles will be available for sale by the time the PS4 is released on 19 December. Some notable games include: Assassin’s Creed IV, NBA 2K14, Killzone: Shadow Fall, Knack, Need For Speed: Rivals, Battlefield 4, FIFA 14, and NBA Live ’14. Don’t ask me why there are two different NBA titles.

You can view more detailed information about the launch games and the PS4’s system specifications in the official SCEH press release here.

Qisahn.com admits selling HK PS Vitas as S’pore sets, confirms there will be no local warranty from Sony