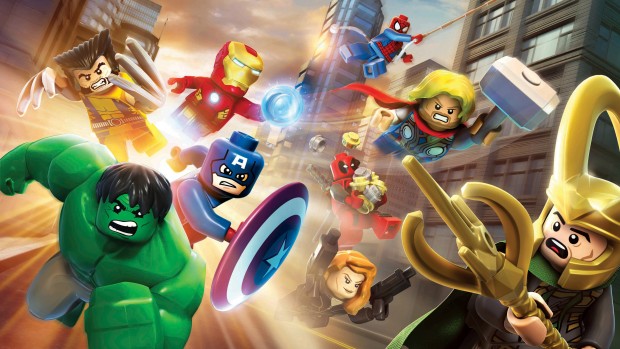 Lego Marvel Super Heroes is a puzzle action platformer. You go around with your blocky super hero, beat up blocky super villains and explore a blocky world.

It is a joy to see familiar heroes ‘blockified’. Minifigs seem to make everything so much more adorable. Even Venom, that alien symbiote from Spiderman, looks passably cute. 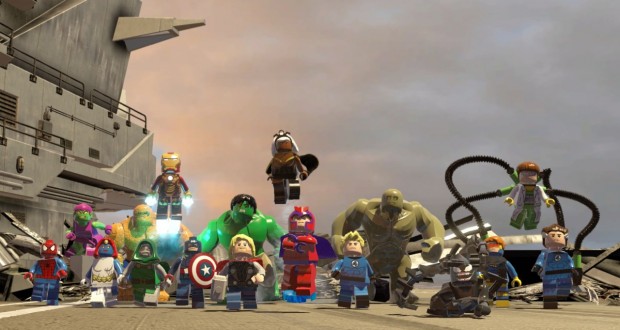 Each character interacts with the different bricks found in game in their own unique way. For example, Iron Man can blow up silver bricks, Hulk can toss huge bricks with green handles and Captain America can trigger shield switches embedded into various objects with his mighty shield. Switching among characters to use the correct one to solve the puzzles presented allows you to further proceed.

It is not rocket science, but as a first time player of Lego video games, I spent a good deal of time trying to figure out the mechanics. The puzzles are simple enough but for a while, I didn’t realise that I had to destroy random items in the environment to get bricks to build new Lego objects. It was a little frustrating, and it would have been nice for the game to make it slightly more obvious on what to do at certain points.  Aside from that though, playing as the Hulk and smashing enemies into little Lego pieces is oddly satisfying.

You are given a health bar of 4 hearts, but you can never die in the game. Instead if your health is depleted you simply break down into Lego pieces and respawn, losing about 1,000 Lego bits, the currency in game. But there is no fear of ever running out of bits; nearly everything in the game can be destroyed to create bits. Upon completing the game, I racked up close to 2 million bits.

The game’s general premise is something about Doctor Doom collecting Cosmic bricks and wanting to take over the world. Along the way, other baddies such as Magneto, Doctor Octopus, and Loki come along to wreak havoc. And oh, Galactus is hungry. Or something to that extent. 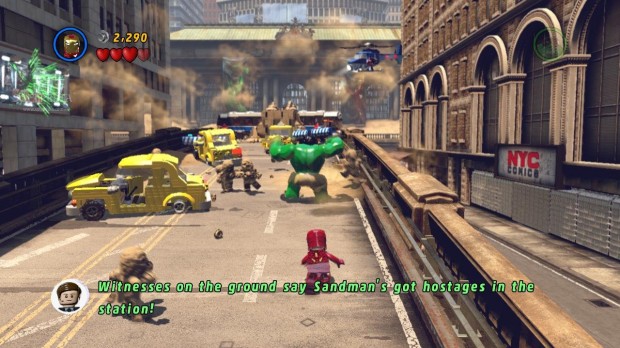 The plot isn’t important, but that’s okay. Part of Lego Marvel Super Heroes’ charm is the fact that it never takes itself seriously. The humour in the game is simply fantastic. Mister Fantastic announces that he is fighting ‘for the sake of nerds everywhere’. Doctor Doom builds a death ray called the ‘Doom Ray of Doom’. You get the picture.

Developers TT Games chose to make tons of references to the Marvel Movie Universe, and it proves to be a masterstroke. It helps one ease into the game as familiar elements pop up throughout. Fan favourite Agent Coulson, voiced by Clark Gregg, plays a prominent part of the game. The Tesseract from Captain America and the Avengers is the primary MacGuffin. You even start the game playing as two of Marvel’s most recognizable characters at the moment, Hulk and Iron Man.

And outside of the 15 main missions, lies an enormous ‘Lego-fied’ Manhattan for players to explore. Peppered with iconic Marvel landmarks such as the Hellfire Club, Wilson Fisk’s headquarters, and the X Mansion, it is an absolute treat for Marvel fans. Mr Marvel himself, Stan Lee, even has a cameo appearance in the game. He pops up throughout the game in dire situations, needing to be saved.

With tons of other side quests, mini games and characters to collect before you can reach 100% completion, there is more than enough to keep the game completists satisfied.

Hardcore gamers might feel that the game might be too simplistic and bland for their tastes, but Lego Marvel Super Heroes is perfect for families. With its pitch perfect humour and decent gameplay, it is a great addition to any video gaming family’s’ catalogue.

Now excuse me, as I head to my nearest Toys “R” Us and get myself some Marvel Lego toys to play with.

LEGO Marvel Super Heroes is out now on PS3, Xbox 360, Wii U, PS Vita, 3DS, and the PC. A PS3 copy of the game was submitted to No Game No Talk for review.

Company of Heroes 2 announced, set in the Eastern Front