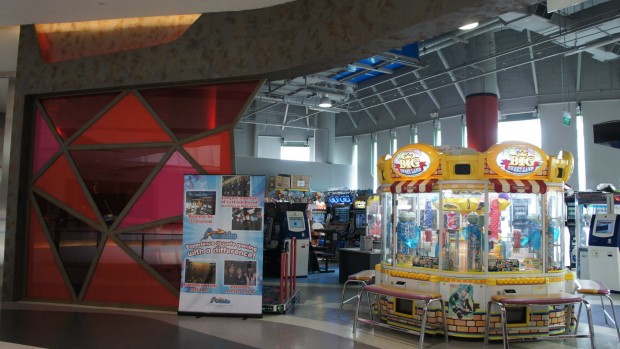 The most important factor for any arcade are its games, and this was where Arcadia caught the attention of many gamers back in 2009-2010 when it first opened. Stepping into Arcadia during that time was like walking through an arcade gaming hall-of-fame, for it had a collection of some of the most popular arcade titles, both past and present. It had something for everyone, especially fighting game fans. Well established and popular fighting games like vanilla Street Fighter IV and BlazBlue: Calamity Trigger were there of course. But there were also other titles like Guilty Gear XX: Accent Core, Marvel vs. Capcom 2, Tatsunoko vs. Capcom, Melty Blood: Actress Again, Battle Fantasia, and Arcana Heart 2. There was even a two-player setup for Dungeons & Dragons: Shadow over Mystara, a game originally released back in 1996, and almost impossible to find in any arcade in the world now.

I do not play rhythm games, but I could see that even the Beatmania and Jubeat machines at Arcadia had a reasonable gathering of players. There was even a UFO catcher for mini-cups of Ben & Jerry’s ice cream, and one of my friends quickly mastered the art of scooping up those cups for himself and his buddies. Ben & Jerry’s for only one dollar? Sign me up.

And it wasn’t just the games, but the machines were also given equal importance. Prior to 2010, Vewlix cabinets were still incredibly rare and almost unheard of in Singapore (they were very expensive), but all of Arcadia’s machines used Sega’s Lindbergh Cabinet. The Lindbergh was not perfect, but it was a huge step-up from the Chinese “knockoff cabinets” used by Virtualand that were notorious for being fragile and having poor-quality monitors.

Another unique factor of Arcadia was its use of lighting. You see, most of the arcades in Singapore are all characterised by one thing: their deliberately dark, poor lighting. Just walk into any Virtualand arcade, and you’ll know what I mean. Whether it’s an intentional design to save daily electricity, or to generate some sort of basement-dungeon atmosphere — a nickname lovingly given to the Bugis Virtualand arcade by the community here — Arcadia was a breath of fresh air (and light) for most arcade goers.

But perhaps Arcadia’s greatest achievement, was in uniting the community through its frequent tournaments. Arcadia was the venue of Singapore’s first ever Melty Blood: Actress Again arcade tournaments back in 2009. While I only started playing Melty in early 2010, the tournaments actually convinced me to pick up the game, because it meant that there was an active local community. There was also an incredibly popular 64-player tournament for BlazBlue: Continuum Shift back in 2010. Sixty four. A massive turnout for any title, fighting game or not. In my opinion, this was the true zenith of the BlazBlue community in Singapore, for the tournament attracted a lot of new faces, and I even remember that there were two very young primary-school siblings who took part. 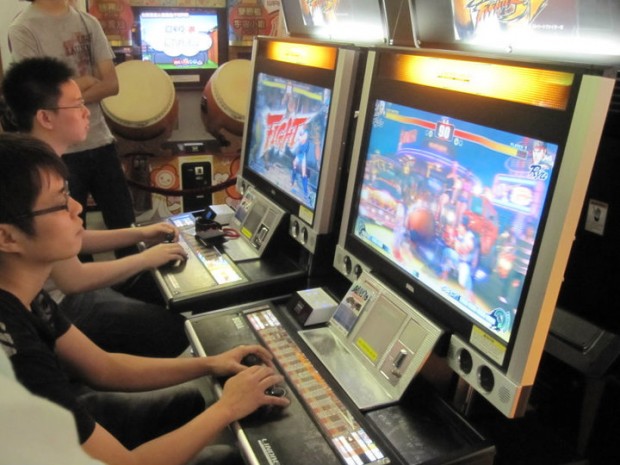 In late July 2010, the management of Arcadia organised our country’s first ever Street Fighter IV tournament qualifiers for TOUGEKI ’10 Super Battle Opera (SBO). SBO was the Japanese equivalent to America’s EVO Championship Series, and the three-man team that eventually won the Singapore qualifiers consisted of a player named Kun-Xian “Xian” Ho. While Xian’s team was eliminated early in the SF4 tournament when they went to Japan, Xian himself took part in the individual King of Fighters 13 SBO tournament, and managed to secure joint third place. This accomplishment was the beginning of Xian’s road to fighting game stardom, culminating in his EVO 2013 championship win for AE 2012.

And it was all thanks to Arcadia. Arcadia gave Xian his first kick-start for major international tournaments. Arcadia compelled me to pick up Melty Blood as my main fighting game. Arcadia was the the first game centre in Singapore that brought in Super Street Fighter IV: Arcade Edition in early 2011, several weeks before Virtualand did. And what did the community do to repay Arcadia? They promptly jumped ship when the games there were no longer convenient for them.

Videogamers have a fickle, almost mercenary attitude when it comes to gaming, and Arcadia was no exception for them, unfortunately. For almost two weeks, the entire SF4 community flocked to Arcadia to try out Super Street Fighter IV: Arcade Edition. I even remember seeing Xian and the rest of the regular SF4 players camping out at the machine on Friday nights. But when Virtualand brought in Arcade Edition about a month later, everyone returned back to Virtualand, even though Arcadia had better Lindbergh cabinets. The BlazBlue community stuck around longer thanks to the release of BlazBlue: Continuum Shift II in June 2011, but by the beginning of February 2012, they had all but abandoned the machines at Arcadia because of the release of BlazBlue: Continuum Shift Extend on consoles.

I was also guilty of bailing out on Arcadia. For the majority of 2011, the Melty Blood community in Singapore had played Melty Blood: Actress Again on Arcadia’s machines. I had direct contact with their PR manager, a very kind and hardworking lady named Eloise, who had helped us numerous times in early-2011 in getting the machine changed from a lover’s seat to opposing seats, and then from a two-round match to three-round match format for versus games. We promptly jumped back to Bugis Virtualand in late-2011 when they suddenly brought in Melty Blood: Actress Again Current Code, a newer revision of the current game we were playing.

If you managed to read this article until here, and are starting to get confused at all of the different titles and version updates for fighting games, I can’t blame you. Capcom, and especially Arc System Works, are notorious for producing constant revisions for their fighting games. While this is good from a gamer’s standpoint (because it means that their game is getting tweaked with new content), it is an absolute nightmare for an arcade operator. The cost of acquiring a game revision is in the thousands of dollars, and it could take a long time for the game machine to become profitable. By then, another revised edition of the game would be out within a year, and the never-ending cycle repeats itself. It’s a lose-lose situation for the arcade: if you don’t bring in the latest version of the game, the community won’t be interested in playing. But if you do, you incur a huge cost that might not even be repaid by the players.

By middle to late 2012, the local fighting game community’s interest in playing at Arcadia had reached zero. The Lindbergh cabinets, once enjoyable to play with, had started to wear out due to poor maintenance and disrepair. A BlazBlue-playing friend once told me that the joysticks on the old Continuum Shift II cabinet had somehow developed sharp, jagged protrusions, enough to cause a nasty cut if you were not careful while playing. Requests to get the machine fixed fell on death ears — Eloise had already left the company, perhaps a sign of the inevitable that was to come. 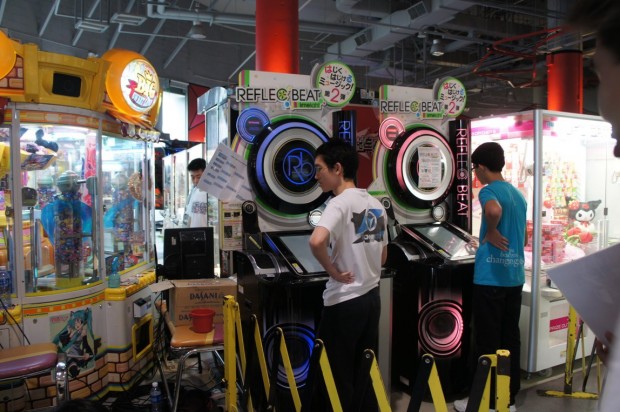 If you take a look at Arcadia’s Facebook page timeline for 2013, they organised tournaments throughout the year for Reflec Beat and Jubeat. But meanwhile in Virtualand, they had brought in several new rhythm games: Sound Voltex and maimai GreeN. Virtualand had the money and resources to bring in new, updated titles, Arcadia did not. I stepped into Arcadia one Friday night in 2013 while having dinner at Bugis+, and was shocked by what I saw: all of the game machines that I mentioned earlier had been removed. No more Shadows over Mystara or Guilty Gear XX: Accent Core. All of the remaining Lindbergh cabinets were playing Arcade Edition. An outdated version of Arcade Edition, that is. Arcade Edition 2012 had been released in December 2011, it was now 2013 and Arcadia had turned all of its fighting game cabinets into a game that was considered outdated.

I knew back then that this was the final nail in the coffin for Arcadia. By taking away all of its variety of games, taking away the only Shadows over Mystara machine in existence, it was only a matter of time before it would close down, because there was no way customers would come to play outdated Arcade Edition. And this was exactly what happened: on the second week of March 2014, Arcadia had announced that it was closing down on 23 March, and encouraged customers to spend any remaining credits they had: 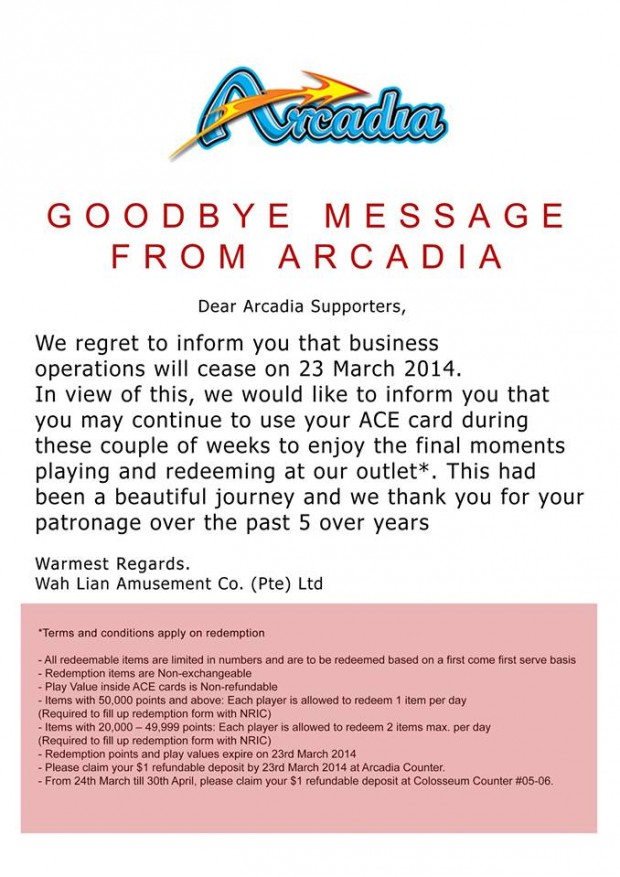 Arcadia’s closure is yet another stark reminder of just how unforgiving the videogame business is. Whether you are selling games, or setting up a game centre for people to play, it’s extremely costly and difficult to turn a profit. Just look at the early 2010 to 2011 period of Arcadia’s history: it was doing fairly well and looked like a viable alternative to Virtualand for Bugis arcade gamers. And then everyone suddenly jumped ship in the blink of an eye, and Arcadia was left to die a slow death.

Goodbye, Arcadia. Not many people will remember you, and some might even hate you — yet another cruel example of the fickleness of gamers. On behalf of the Melty Blood community in Singapore, I am very sorry that we deserted you back in late 2011.

But please believe me when I say that we all genuinely loved playing at Arcadia before that. We loved the Lindbergh cabinets, and we were thankful for Eloise’s immense help. Most of all, we loved having fun at Arcadia. Thank you for showing us the importance of proper lighting when playing videogames, and thank you for all the one-dollar Ben & Jerry’s ice creams.

Images of Arcadia Singapore’s premises taken from their Facebook page.

Update (1 April 2014, 9.30pm): The author previously wrote that the one-dollar ice creams at Arcadia were of the Haagan Dazs brand. This is incorrect, they were actually Ben & Jerry’s. Thanks Mustapusta for pointing out the error.

Details about Arcadia at Licence2Play