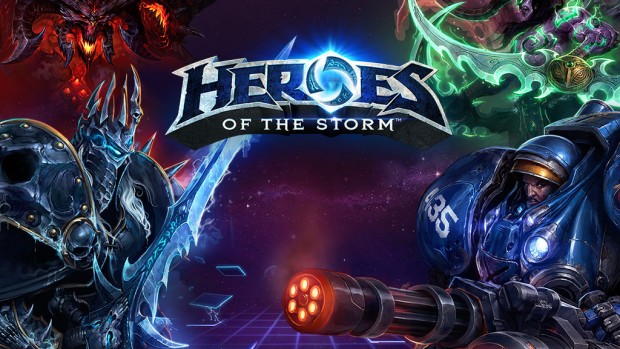 Last Wednesday, No Game No Talk’s crew got to preview an alpha build of Heroes of the Storm (HotS), Blizzard’s upcoming brawler game featuring iconic characters from their popular franchises. Although inspired and influenced by the multitude of Multiplayer Online Battle Arenas (MOBAs) out there, it still manages to differentiate itself from other games in the genre pretty well. Here’s how it does that.

While a standard MOBA game takes anywhere from 45 minutes to about 60 minutes to complete, Heroes of the Storm is designed for each game to take between 20 and 40 minutes, making the game more accessible by reducing the amount of commitment needed. The game’s pace is made quicker by the hearthstone, which allows you to teleport back to base, and mounts to allow faster hero movement. 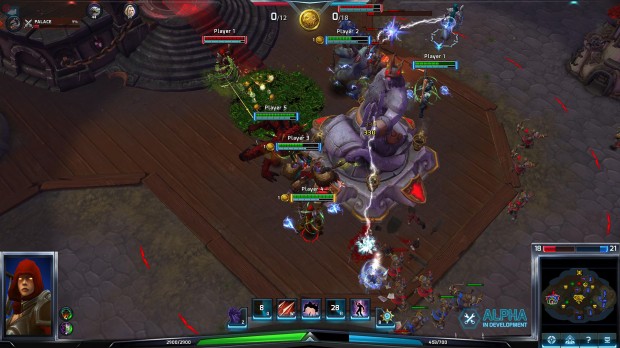 2. No individual levels, only an overall team level.

With traditional MOBAs, each player earns experience points for themselves, and their characters level up accordingly. In Heroes of the Storm, all experience points gained by players goes into an experience pool shared by all the players. This means that anyone focusing on farming XP points will benefit the whole team instead of just one player, eliminating the common problem where some players lag behind in experience points or levels, dragging the entire team under. 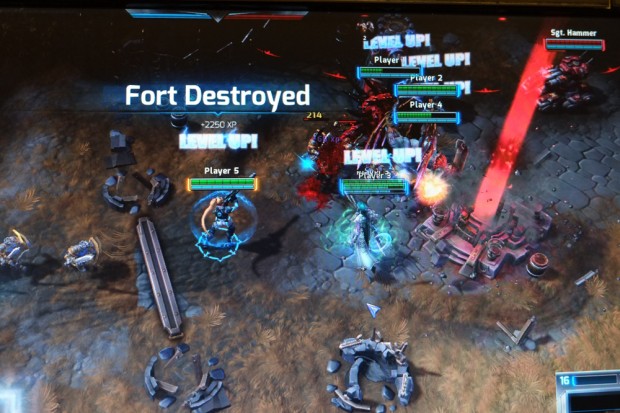 3. Most abilities are unlocked from the beginning

4. Where are my gold and items?

In Heroes of the Storm, players do not need to get gold to buy items, simply because there are no items to purchase in the game. This removes a lot of complexity from the game as players need not worry about a whole list of items, recipes, and their different combinations. This also removes the need to have item couriers.

At the media preview, I managed to try out a few games. The game starts you off with all characters on their mounts which I found really amusing. Imagine an oversized Diablo riding a horse! 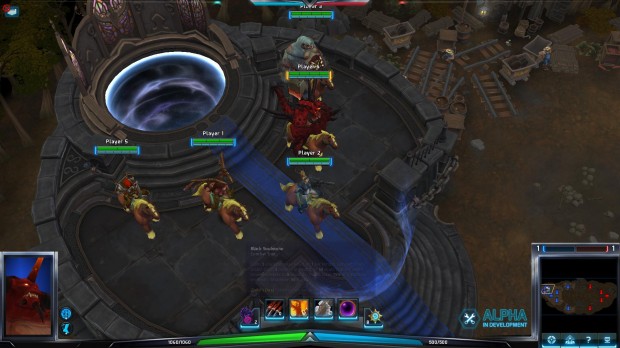 The objective of the game is to get through towers and forts to destroy the statue in the enemy base. Completing events before the other team does will add reinforcements in the form of huge monsters or artillery, who will join your side in dealing damage to the enemy’s structures.

I found the game very action-packed as it encourages your team to work together due to the event mechanics of the maps. In the alpha, we were able to try the Blackheart’s Bay, Haunted Mines, and Cursed Hollow maps. Being a seasoned MOBA player, the controls felt very familiar, the only new button I had to take note of was the “K” key which allows you to mount up for faster travel speed. This was a new mechanic for many players, as I could overhear many members of the media asking each other how to mount up.

To exit the mount, one had to simply attack or cast a spell. Overall, the game felt very action-packed, as no matter where I went, there was something to kill or destroy. Initially, I went about doing my own things but I found out that my team kept losing the objectives, which resulted in my forts being destroyed. It was then I realized the game also forces players to work together to complete objectives before another team completes theirs in order to get the map advantages.

In the midst of completing objectives, combat is bound to happen as both teams will usually head to the same location and cross paths eventually. I would start joining team brawls along the way and totally enjoyed it. I found out that with an extra man, we started to win more fights. Another unique feature to the game are health orbs which drop on the floor for everyone to take. Once again as an anti-toxicity move, any player collecting the health orb will also heal nearby allies. This is great as a full health hero could collect the health orb simply to deny their opponents from healing up, and still pass on the heal benefit to his own teammates. 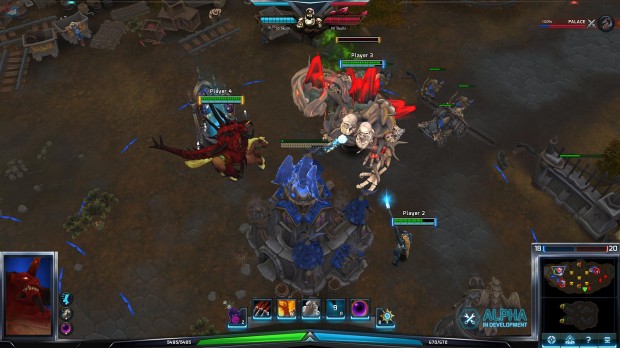 Another point to note, for an alpha version the game feels very polished, no player crashed out of game. It is interesting that when a player alt-tabbed out of the game, the client treats it as though the player left the game. This is good, as it discourages players to alt-tab out to surf the web, losing their attention on the game in the process, especially while waiting to respawn. The Artificial Intelligence for the bots seems quite strong too. I actually lost a couple of matches against the bots. However, that could be due to the fact everyone else was new to the game too. The user interface is very minimalistic, yet it shows you just enough information about the game. I also noticed how they labeled the mercenary and neutral keep camps to indicate what level you should be, and how many players should be attempting to clear the camp.

It’s also a common problem in MOBAs that game interactions could become highly toxic. Blizzard addresses this issue in Heroes of the Storm by not announcing whose hero killed who. However, it comes with a cost. After a kill is announced without a name, I was always unsure if I had actually taken down a hero, or if I had just wasted a spell. Also, the chat was disabled entirely, leaving players to communicate only via pings on the mini-map or through an external Voice Over Internet Protocol (VOIP) client. I personally liked this feature, as many times, players can be easily ganked while being distracted by a chat reply. What I would have liked however, is some sort of emote function, where I can display an emoticon in a speech bubble to express myself on the battlefield. 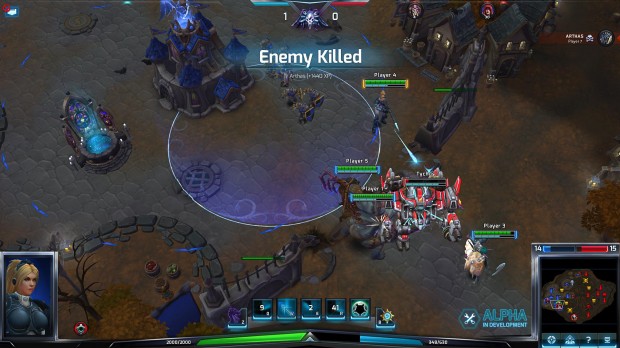 Unlike other MOBAs, there is almost no opportunity for individual glory in this game, except upon each death when the game tells you what you did well in that life. 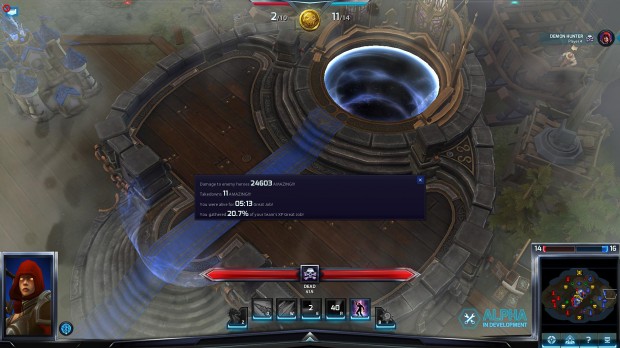 Heroes of the Storm features 18 playable heroes from the Warcraft, Diablo, and StarCraft universe. From the start, a player is given five hero slots featuring the current set of free-to-play (F2P) heroes. As players level up, they get more (F2P) hero slots and gain an in-game currency to unlock more heroes permanently. Hero costs range from 2,000 gold to 10,000 gold. From my observation, Blizzard made the easier-to-use heroes cheaper, and the more advanced and complex heroes more expensive.

I tried a few characters and these were my first impressions of them:

Diablo is a tanking character specializing in crowd control. I love the combo ability where he grabs an enemy hero and flings him to the opposite side. He will then followup with a charge attack to knock the enemy towards your tower. 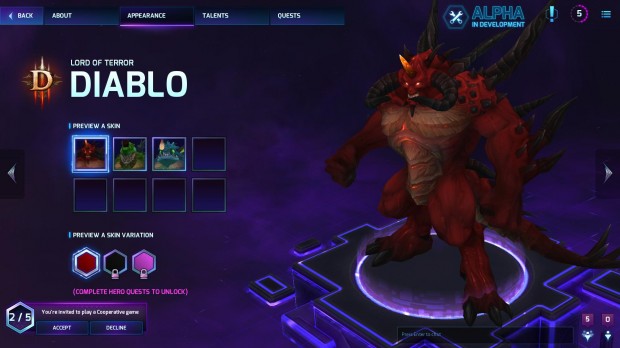 Kerrigan is a melee damage dealer with a pull. Adding a vampire talent virtually made her nearly indestructible when I was dealing damage and replenishing my health. Featured here is the Succubus costume for Kerrigan. 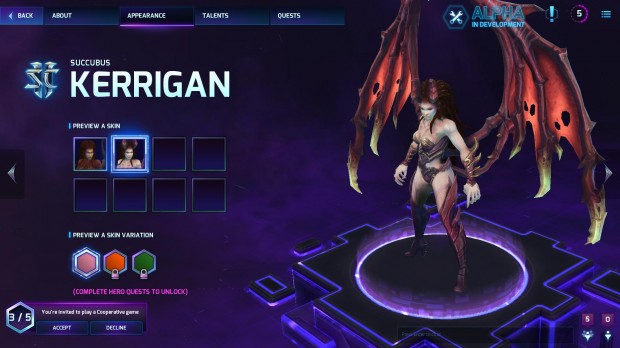 Nova is a ranged damage hero. Like most sniper-type characters in other games, she is really good for gunning down enemy heroes with low hit points who are trying to escape, and she has some area-of-effect (AOE) abilities too. 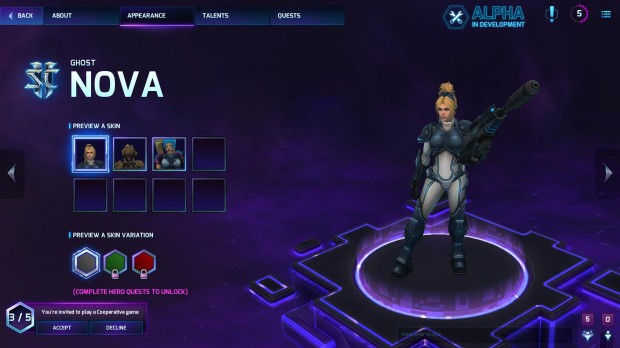 Valla, the Demon Hunter is my all-time favourite among all the heroes I had tried so far. She has a good damage output, and can use her dash ability for pursuit or as an escape mechanism — it can even be used as an AOE spell. I totally managed to dominate the games using her. Featured below is the Vampire Hunter costume for the Demon Hunter. 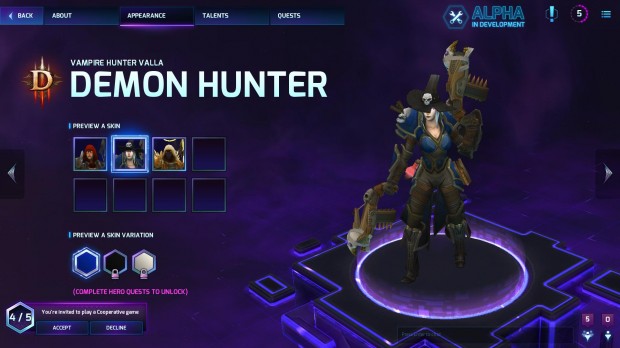 Stitches, a classic rotting abomination character feels more interesting in this game. Apart from the notorious hook ability to pull enemy heroes towards you, he has an upgrade talent that allows him to consume enemy heroes, move a few steps and then spit them out, buying extra time for nearby allies to gank the doomed enemy hero. 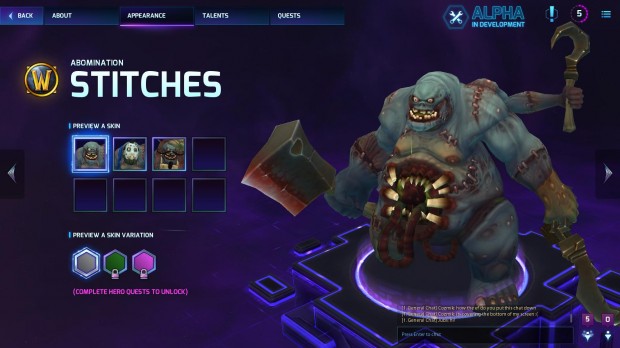 Players can only unlock custom skins for their heroes by purchasing it with real money. However, Blizzard has mentioned that they intend to give out free skins at future Heroes of the Storm events, and all players will be awarded a free skin when they reach player-level 6. Colour tints are also unlocked by completing heroic quests. Below is a screenshot preview of all the currently available skins. You can check out the close-up views of all the skins on our Facebook album: 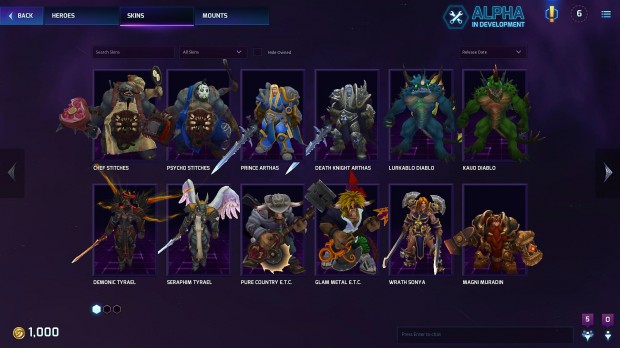 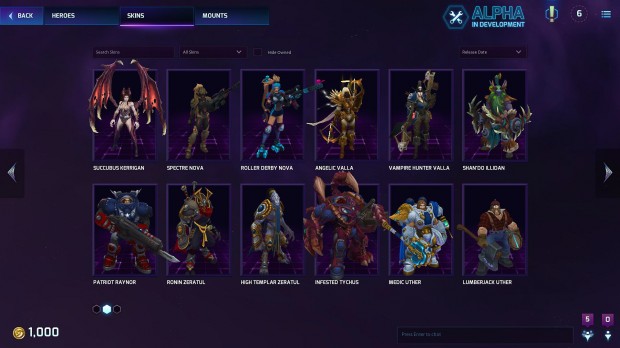 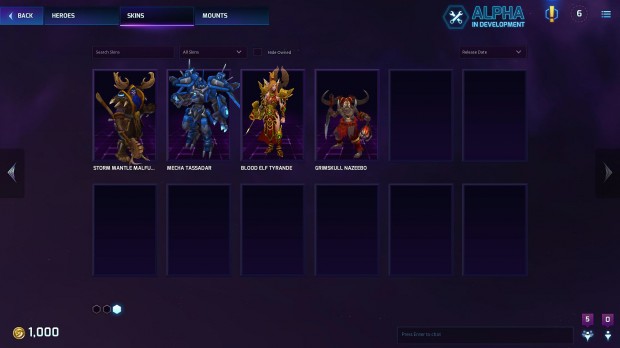 On the topic of mounts, the alpha version had five different mounts for purchase. The Direwolf costs US$7.49, and the Warhorse and Cyberwoof costs US$9.99. The most expensive and grandest of them all is the Rainbow Unicorn from Diablo III, costing US$19.99. You can also view the screenshots of the mounts in our Facebook album.

Overall, I totally enjoyed the game. It is a very streamlined, fast-paced game with all the unneeded complications trimmed away, it left me wanting to play more and I am definitely anticipating the Open Beta of this game. I am already prepared to purchase some of the skins they were offering too!

Heroes of the Storm is scheduled to be released for PC and Mac, but currently has no confirmed release date yet. You can sign up for the beta here (Battle.net account required): http://www.heroesofthestorm.com/en-us

Company of Heroes 2 announced, set in the Eastern Front