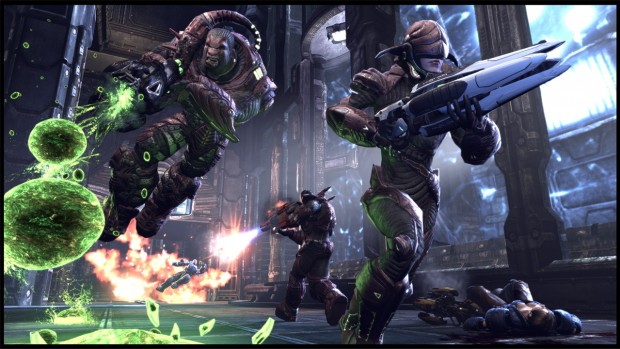 Unreal Tournament 2014 will be a free game. Not free-to-play (F2P), but absolutely free to download with no microtransactions. Epic Games will openly encourage players to produce custom maps and mods for the game, and leave it up to these content creators to decide if they want to release their creations for free or at a small fee.

Remember back in the late 1990s and early 2000s, when Half-life deathmatch, Quake III: Arena, and the original Unreal Tournament (UT99) were still popular? One defining aspect of all these deathmatch shooters were the huge amount of custom maps you could download: they were made by the community, for the community. Some creations in UT99 for example, were so popular that they were released as official map packs by Epic. Making UT2014 free and encouraging user-made content, is a return to the original roots of the online FPS, and I am very excited that Epic has chosen to embrace this model and not resort to the F2P paywalls of many other online games.

However, all free games come with their caveats, and there is one mistake that Epic must avoid at all costs: they must not turn UT2014 into a post-F2P Team Fortress 2.

Ask any gamer to describe TF2 now and the usual responses would be: hats. Lots of hats. Idling simulator. Crate-opening grind. More hats. By choosing to turn TF2 into an F2P game, and relying on the game’s item catalogue as a means of generating income, Valve has inadvertently sentenced TF2’s competitive scene into the graveyard.

The original purpose of TF2’s item drops and custom weapons was to give players an incentive to play the lesser-used classes like the Medic and Pyro. The custom weapons weren’t overpowered, but offered alternative ways to play the classes: Medics could sacrifice the Medi Gun’s UberCharge-invincibility for the critical-hit boosting Kritzkrieg, allowing them to play a more offensive-minded role. Pyros could swap the reliability of their Shotgun for the Flare Gun, which was harder to use but gave them an option for setting enemies on fire at long range.

But somewhere along the way, after the Sniper vs. Spy update in May 2009 and the WAR! update (Soldier vs. Demoman) in December 2009, Valve got carried away and started going overboard with the item drops. The addition of weapon crates that had to be opened by keys made things worse. TF2 was no longer a cooperative team vs. team shooter, it was an FPS diluted with pseudo-RPG item drops. The competitive TF2 scene in Southeast Asia, which reached its highest peak in WCG 2009, promptly died down after that. When TF2 went free-to-play in June 2011, the game’s servers were overflowing with F2P players, which frustrated the semi-competitive and semi-serious veteran players — any hopes of sustaining a competitive TF2 community had been completely destroyed by the opening of the F2P floodgates.

UT2014 will start out as a free game of course, and everyone will start on the same clean slate. But Epic must take note of the following steps to ensure that UT2014 does not suffer the same fate as TF2 or Unreal Tournament III:

The 2Fort map in TF2 is a long-time classic, a leftover from the original Team Fortress Classic and Quake: Team Fortress. But playing the same map for the millionth time can become weary and boring after awhile. Epic needs to find a way to encourage gamers to play all of the different maps and all of the different game modes (once they are eventually added — only basic deathmatch will be available for UT2014’s initial release).

I enjoy watching recorded matches of my fighting games just to see what mistakes I made, and how I can improve. If Epic can make online UT2014 matches savable and recordable, it will not only help beginners to improve faster, but it will also be easier to upload match videos and highlights to YouTube — a notoriously difficult aspect of the FPS genre.

The default setting introduced in UT99 was perfect: an intergalactic tournament where participants could enter for fame, fortune, and to test their skills. UT2004 added a more “sporty” feel to the series but it still didn’t attempt to break the setting.

UT3, for some stupid reason, decided to ditch the tournament setting, and replaced it with a ridiculously bad story about war, revenge, and field-lattice generators (FLaGs). The reason why you had to capture FLaGs in CTF maps, was so that you could depower your enemy’s respawners on the battlefield. Because when soldiers die on the warfront, they immediately respawn back to life. I am not joking, this is an actual story fact from UT3’s campaign.

4. No in-game item or weapon drops of any kind

Custom weapons are fun, and the mod community of UT99 and UT2004 were quite famous for that. But do not make them drop in-game like an RPG. Release them as weapon-mod packs for all players to download, and make every weapon available for everyone, should they choose to use it. There is nothing more potentially unbalanced in an online shooter if a player has access to a weapon that their opponents do not.

And while on the topic of custom weapons…

5. Absolutely no character-leveling system of any kind

Please leave your Call of Duty and Battlefield character-leveling systems at the door. There is no place for that in an online deathmatch shooter. This is fucking Unreal Tournament we are talking about.

The author is one of the very few UT fans that actually enjoyed Unreal Tournament 3, despite its flaws. His favourite weapon is the Flak Cannon (of course), his favourite map is the original HyperBlast from UT99, and his favourite character is Xan Kriegor.

The 3 biggest mistakes I’ve made with NGNT