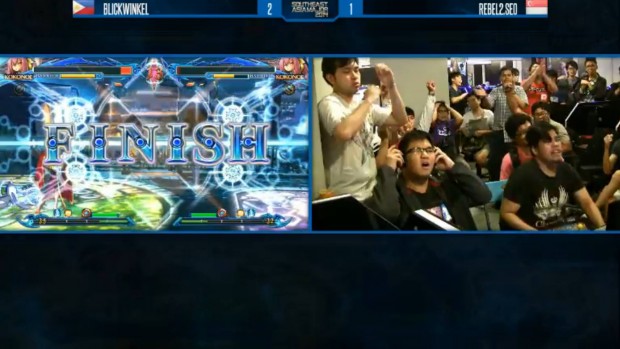 Singapore and Southeast Asia’s biggest fighting game tournament of the year, Southeast Asia Major 2014 (SEAM 2014), concluded yesterday, and Singapore failed to take any of the first spots for all five games.

Singapore’s best chance in securing a championship came from BlazBlue: Chrono Phantasma (BBCP), with everyone expecting Nicholas “SEO” Choo to take the top spot with his deadly Kokonoe.

However, SEO met his match in Robert “Blickwinkel” Andrada (representing Philippines) in the grand finals, who also used Kokonoe. Blickwinkel was able to outsmart SEO with some clever neutral play, and managed to reset the bracket by winning 3-2, before taking the second decisive set at 3-1.

You can view the entire brackets for SEAM 2014 here: http://toughcookietv.challonge.com

Update (23 June, 5:45pm): The author had previously left out the results for the King of Fighters XIII tournament, and erroneously reported that there were only four fighting games at SEAM 2014. The mistake has been corrected.