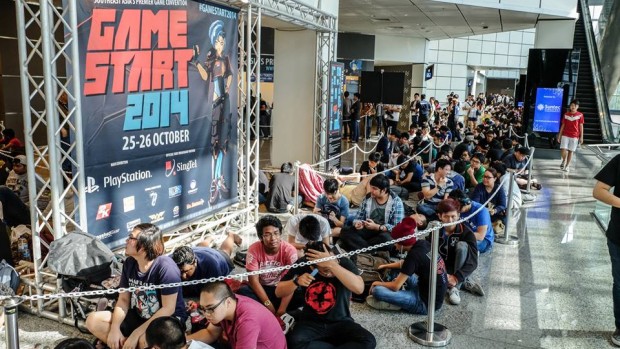 Amos and Edward both attended GameStart 2014 over the weekend. Did it live up to its hype as the Southeast Asian version of the Penny Arcade Expo (PAX) or Gamescom? Here are their thoughts on the event.

Edward: Before we start talking about GameStart (no pun intended), we need to get an important disclosure out of the way. Amos and I both had media passes, and were able to skip the queues on Saturday to enter the event a couple of hours before the doors opened at 12pm for the public.

But immediately after that, we quickly went back to the end of the line to queue up. GameStart was an event marketed as being “for gamers”. Therefore, we felt that we also had to experience the event from the normal gamer’s perspective. By queuing up just like everyone else. 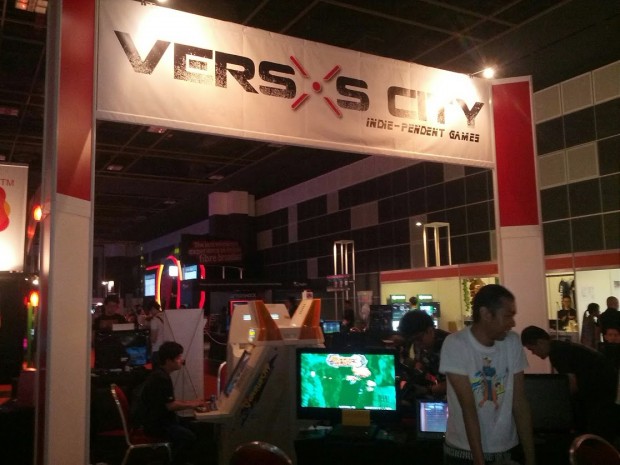 Amos: As I headed to GameStart on Saturday morning, I was truly excited. I loved the fact that Singapore and Southeast Asia finally had a gaming expo to call its own. GameStart was trying to forge itself in the likeness of the Tokyo Game Shows and PAX, which is timely as gaming is garnering more and more mainstream acceptance in this region.

Edward: GameStart is technically not the first gaming expo in Singapore. The Games Xpo (TGX) and Games Convention Asia (GCA) are two prominent ones that come to mind, but with a different target audience. TGX was more e-Sports oriented, and was the venue of the Singapore World Cyber Games national finals for several years. GCA was geared towards game developers and businesses.

Both conventions died after a few years, losing steam after their popularity had died down. And this was my greatest fear about GameStart: it generated a huge wave of interest on social media, but can it continue to sustain and grow itself for future conventions? 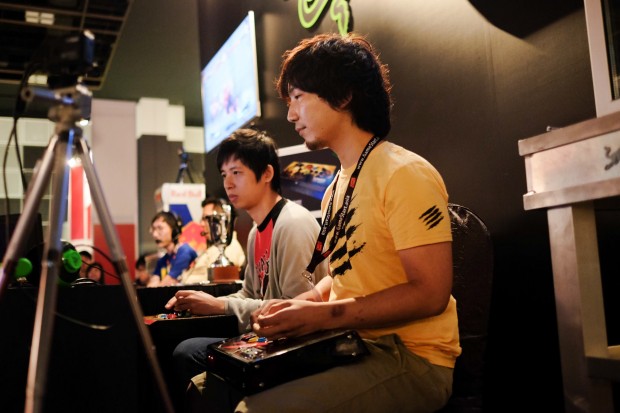 Amos: Everything about GameStart 2014 sounded brilliant on paper. It had superstar gamers like Japanese Street Fighter legend Daigo Umehara and producers such as Capcom’s Yoshinori Ono gracing the event. Plus the chance to try out unreleased games like Bloodborne and Evolve? Surely this would be the perfect event for gamers to attend?

But when I stepped into Hall 403 that morning at around 10am before the huge crowds entered, I just felt… underwhelmed.

Perhaps it was the size of the hall. I always imagined it to be larger, with more booths to try new games and exclusive first-hand previews. One round of the hall took about 15 minutes, and if you weren’t lucky enough to get your hands on a controller, you would just be left standing around watching in envy. I feel that for the causal gamer, it was hard to warrant a two-day pass, even with the variety of events scattered through the days. 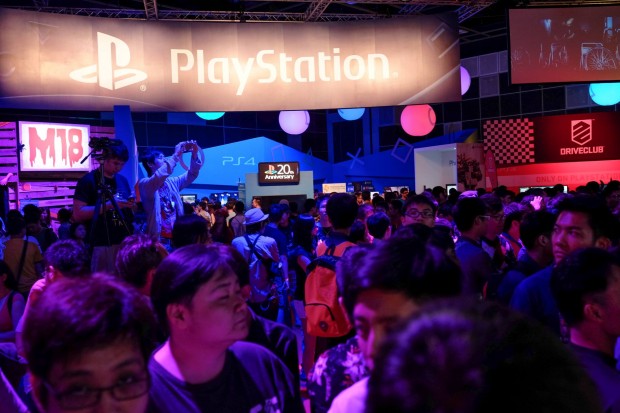 Edward: There were actually a few good events on the main stage. There was an excellent videogame music showcase by Gwen Guo of IMBA Interactive, a game company that specialises in sound design and music production. It was the perfect way to end Day 1 of GameStart, listening to remixed versions of your favourite gaming tunes spliced into each other. I loved the part where the StarCraft Terran theme transitioned into Metal Gear Solid’s signature BGM — it was seamless and brilliant.

Daigo’s Ultra Street Fighter IV Omega showcase at 3pm on Day 1 was easily one of the biggest highlights of GameStart, drawing a huge amount of spectators who crowded around the stage to watch him and Singapore’s Kun-Xian “Xian” Ho demonstrating the new Omega update that will be released in the coming months by Capcom. Everyone in the crowd was screaming bloody murder at Guile’s new dive kick and Ken throwing out fireballs with his FEET.

But I agree. Unless you had something that you specifically wanted to queue for at GameStart, it was a small event. 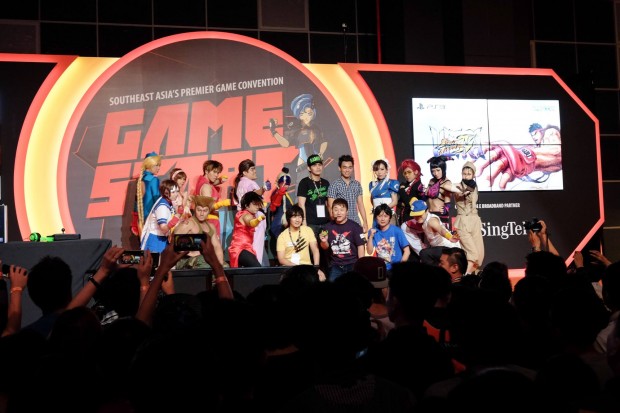 Amos: Maybe it was the exhibitors. Clearly, Sony had a huge presence in the show. You just really couldn’t escape its giant booth.

Edward: They technically had three booths. The PS4 demo booth, the M18 games preview booth, and the PlayStation Arena where the members of our local fighting game community were holding a Guilty Gear Xrd pre-release tournament. Did you see what Arc System Works did to the background of one of the stages? 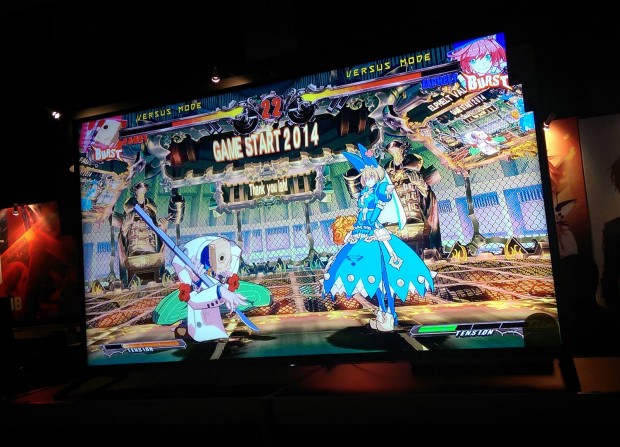 Amos: What a nice nod by Arc System Works! Thank you lah! But I think it would have been nice to have Nintendo and Microsoft or even the PC gaming community play a bigger part in the show. More local showcases would have been nice too. Sadly, the regional indie developers were relegated to smaller booths at the back, away from all the attention.

Edward: According to Tech in Asia’s interview with Elicia Lee, who is one of the key organisers of GameStart, she did her best to bring in as many big-name publishers as possible. But the stigma of Singapore’s past failed conventions lingered, and many of them were hesitant to commit.

It’s an understandable caveat for organising a first-time event, and you can’t fault the organisers for not trying.

Amos: I was extremely disappointed with the Blizzard booth, which only had a few stations for playing the PS4 version of Diablo III: Reaper of Souls and Hearthstone. Absolutely nothing for Warlords of Draenor, which is about to be released on 13 November. I’m surprised that Blizzard SEA did not use this chance at GameStart to try and tempt players back into the game with a pre-purchase or subscription offer.

Edward: To be fair to Blizzard, I did enjoy the Heroes of the Storm showcase that was shown on stage during the second day of the event. As someone who abhors the idea of playing MOBAs, HotS looked fun to play and has successfully piqued my interest. Exactly the target audience it’s aiming for: the casual crowd of MOBA noobs. 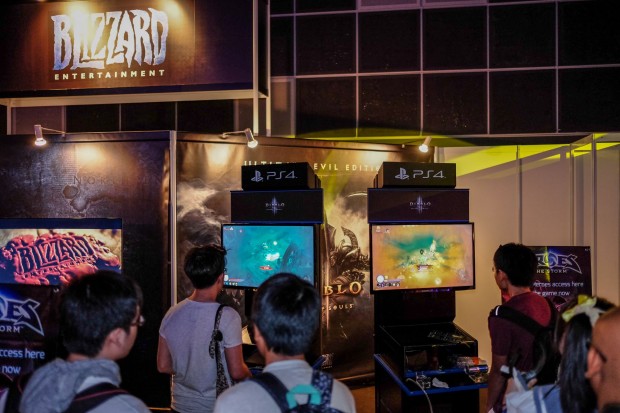 Long queues and the unusual requirement for re-entry

Edward: I would like to spend the next few paragraphs talking about the queues at GameStart. It is very important.

Amos: Because of our Singaporean pastime for queuing?

Edward: Because if you exited the hall after visiting the show, and wanted to re-enter later, the ushers would force you to go to the very back of the line to re-queue. At around 12pm+ after the doors opened, it took us about 15-20 minutes to reach the front doors of Hall 403 from the back. No big deal, it’s expected.

But at 1pm to 2pm onwards, during the critical lunch period, I had two friends who were stuck in the queue for as long as 45 minutes to one hour. I left the hall with another group of two friends just before 2pm to grab a quick lunch, came back, and was greeted with the horror task of having to queue again. Even though we had the wrist-bands signifying that we had already entered earlier.

Although the queues reverted back to a 15-20 minute wait after 3pm, this rule drove one of my friends absolutely mad as he decided to just simply head home. That’s one frustrated customer lost. All because he had to re-queue. 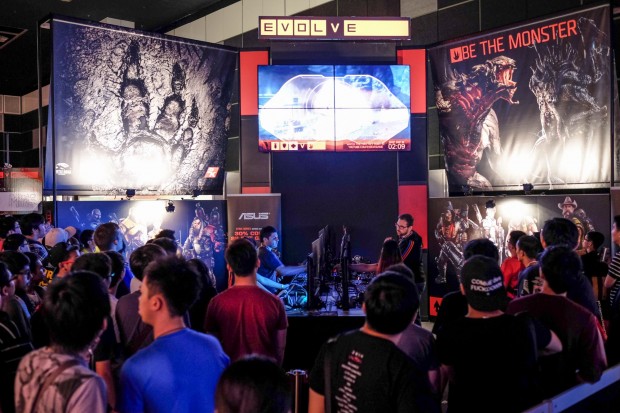 Amos: It is understandable that they couldn’t let too many people into the hall due to safety restrictions. Overcrowding poses a serious fire hazard, and people have died in the past at overseas conventions because of this.

Edward: Oh I am absolutely supportive of safety regulations, security is paramount. But I think a better compromise would be to create two queues — one for re-entry customers, one for those who had not yet entered the event. This makes far better sense.

Amos: As someone who also experienced the queues, it was frustrating to wait outside just to enter.

The much touted loot bags were also a tad too random, offering anything from a headset (rare!) to a Razer LED necklace (more common). On a personal note, I went home doubly frustrated as the PS4 I bought at the event after trading in my PS2 for the $100 rebate turned out to be dead out of the box. Compounded with queuing an hour and a half for it, it was a bummer.

Edward: I believe your PS2 was taking one final stab in the dark back at you. Betrayer!

Amos: I do have to admit, however, it was great to have first hand previews of games like Bloodborne, Evolve, and Little Big Planet 3. I myself managed to play Bloodborne. The game reminded me of a mix between Dark Souls, Bayonetta, and God of War, all while cutting me to ribbons and impressing me in just three short minutes.

And to see the gaming community come out in support of the event like this is just inspiring. It was our day out together to have some fun, and to indulge in something we all enjoy. Talking to anyone at the event was so easy, as we bonded over our favourite games and characters even as we waited in queues. 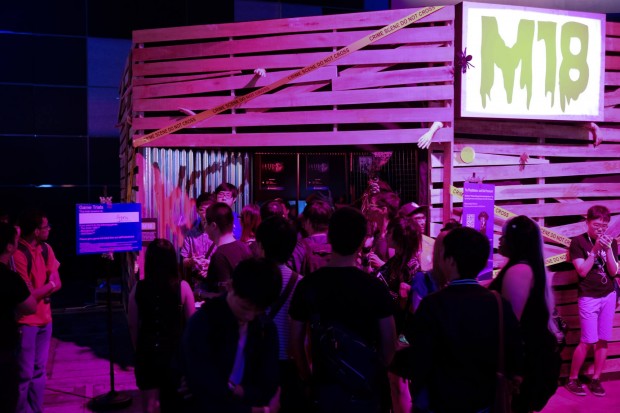 Regardless of GameStart’s teething problems, I am proud of what Ms Elicia Lee and her team have done here. Understandably, the first iteration of any event was bound to be choppy, but I took away more positives than negatives from the entire experience.

And when GameStart 2015 comes around (extremely hopeful this happens), I will be sure to attend. Hopefully, most, if not all of the kinks would have been ironed out. This is a gaming event we can finally call our own, and I hope to see it grow as the years go by.

Edward: Please bring back IMBA Interactive’s game music showpiece for a second round next year. It is very important.

Image of Guilty Gear Xrd taken from the official GameStart 2014 Facebook page. Image of Watch_Doge taken by Nicholas Lee. All other images at GameStart were taken by NGNT.