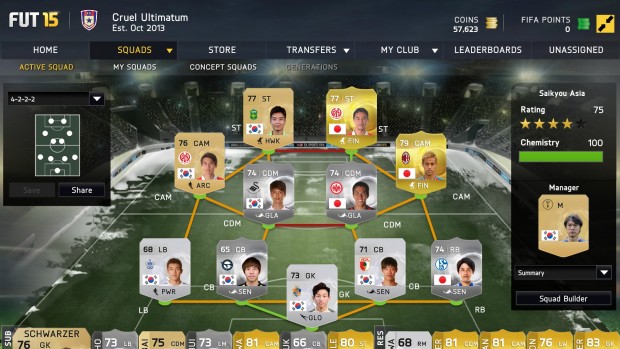 I unpacked Robert Lewandowski on Boxing Day in FIFA 15’s Ultimate Team (FUT) game mode, a sort of fantasy football league where you create teams by purchasing and opening card packs containing football players. I was streaming the moment on my Twitch channel, and I remembered my reaction to be something along the lines of: 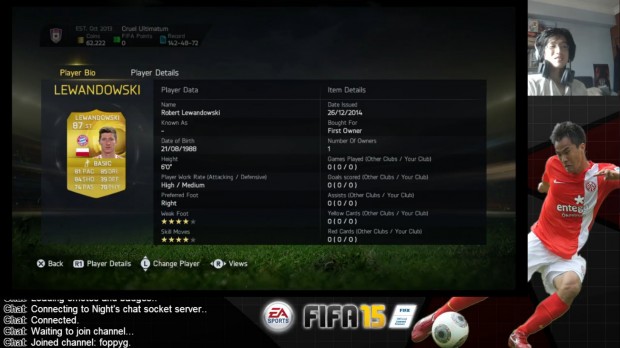 For those unfamiliar with German football, Lewandowski has been Borussia Dortmund’s top goalscorer for the past three seasons, and he was the Bundesliga golden boot winner for the 2013-14 season. Obtaining him is the equivalent of unpacking let’s say, Zlatan Ibrahimovic (French Ligue 1) or Lionel Messi (Spanish La Liga). He is the best-rated Bundesliga striker in the game, with a player rating of 87. He’s pretty good.

And in his first match for my Bundesliga FUT squad, Lewandowski missed a penalty kick.

It’s these dumbfounding, fall-back-to-Earth moments that make you wonder: why am I spending so much time playing this game?

Anyone that has ever played a trading card game (yes, Hearthstone counts as one) will understand the thrilling addiction of chasing after that perfect card, of the endless tinkering required until you come up with that impeccable deck combination that will make your playstyle become seemingly unbeatable.

FUT is exactly the same in this regard, but the gel that holds it all together is Team Chemistry. Lining up players that share the same nationality, club, or league with each other will increase their Team Chemistry, giving a further boost to their in-game stats. It’s up to you to do the research and find the right FIFA 15 players that will suit your team.

I have been playing with an Asian FUT squad since FIFA 14, and I did the same for this year’s game, which has been met so far with a mixture of ridicule and bewilderment from my Twitch viewers.

“You need better defenders… you need a better team.”

“Are there even any Asian in-form (IF) players?” (answer: Yes – Shinji Kagawa, Winston Reid, and Maya Yoshida)

“You are stupid at this game you have no friends that’s why you are Asian.”

I agree that Asia’s performance at this year’s World Cup was terrible, with Japan, our continent’s strongest team, failing to even make it past the group stage. But this is still my Asian pride as a football fan. I want to make an Asian FUT squad, the strongest possible Asian team in FIFA 15, and I want to make them succeed.

The beauty of FUT mode is that it teaches you a lot more about the lesser players and lesser teams in the most engaging manner possible. There is no Asia equivalent of Lewandowski, Ibrahimovic, or Messi unfortunately. The highest rated Asian is Borussia Dortmund’s Shinji Kagawa at 81 (82, if you count his super rare IF card), followed closely by AC Milan’s Keisuke Honda at 79. The two best Asian strikers are South Korea’s Lee Dong Gook (77) and Japan’s Shinji Okazaki (77).

How the heck do you fit Kagawa (Bundesliga), Honda (Serie A), Lee (K League), and Okazaki (Bundesliga) into the same team while still maintaining team chemistry?? Welcome to the neverending, alluring addiction of FUT. You will start finding and using players that you’ve never heard of just to link the whole squad together. I recently discovered that Queens Park Rangers have a South Korean left back named Yun Suk Young. He’s not the best Asian left back available in the game, but he’s absolutely the right man to link up with my central defence pairing of Winston Reid and Maya Yoshida, who are supported at the back by Australian goalkeeper Mark Schwarzer.

I’ve learned that the Bundesliga is filled with many Japanese and Korean players (including one Australian), which inspired me to create a secondary Bundesliga FUT squad with the best non-Asian players that I could afford. This was where my excitement at unpacking Lewandowski came from.

I’ve learned to love under-appreciated players like Hajime Hosogai and Makoto Hasebe, the two best Central Defensive Midfielders (CDM) for Japan who also play in the Bundesliga. CDMs are a very important role in FIFA 15. I’ve also learned that Japan right back Atsuto Uchida is very popular back in his home nation because “he’s quite good looking”, but for some reason he has a habit of getting himself sent off a lot in my matches.

I have also spent 40,000 coins (that’s a lot of FIFA 15 currency, mind you) to purchase Bayern Munich’s Mario Gotze, the World Cup hero who scored Germany’s winning goal in extra-time against Argentina, just for sentimental value. He’s Mario Gotze for crying out loud! 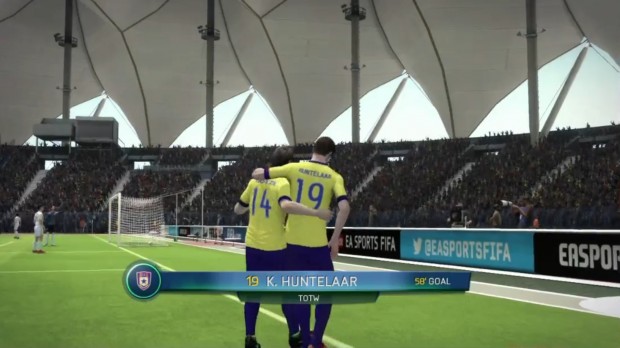 After playing over a dozen matches with my Bundesliga team, Gotze has yet to score a single goal along with Lewandowski. Instead, Klaas-Jan Huntelaar and Henrikh Mkhitaryan have stepped up to provide the goals. Which is great, but then again, what’s the point of getting Gotze and Lewandowski again if they’re useless so far?

You will continue to love and hate FUT mode like a constant ebb and flow. There are some days where you will swoon with excitement and joy, then there are the dark moments of anger that will make you want to smash your controller on the desk. Whatever your relationship with FIFA 15’s signature game mode, playing it will undoubtedly make you a better, more knowledgeable football fan.

Just remember to run like hell from any teams with Pierre-Emerick Aubameyang. Oh wait, you CAN’T because he has 95 Pace.

The author’s top scorer and favourite player in his Asian FUT squad is Shinji Okazaki.