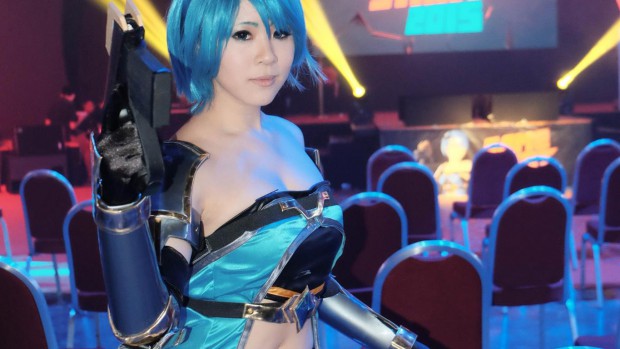 Before we discuss the games at GameStart 2015, I would like to spend one paragraph talking about the queues at this year’s event. It was almost non-existent.

The bigger venue this year probably played a big factor. With more space, there was less danger of overcrowding, completely negating the need for queue management. There was still a queue on Saturday morning before the doors opened, formed by gamers who wanted to receive the free loot bag for early birds. But after that, it was smooth sailing. Really. I checked at 12pm, 1pm, and 2pm — the crucial lunch period — and you could still walk through the doors immediately. I even spotted some latecomers purchasing tickets on Sunday at 3pm+ and they managed to walk right in after that.

So with GameStart 2014’s biggest negative completely and utterly eradicated, let’s move on to videogames!

A friend who purchased a VIP ticket for Friday remarked to me that “This is exactly like TGS (Tokyo Games Show). There’s nothing much to ‘see’, you’re just here to try out the games.”

And there were a few unreleased games that caught my attention. The biggest one for me was Battleborn, it had two PS4 stations for the technical test build set up in the Sony PlayStation booth. I was quite impressed by it and will write a preview about my experience in a separate post. Mighty No. 9, the Kickstarter funded game by Keiji Inafune, the creator of Mega Man, also had a playable build beside Battleborn. It felt like a typical Mega Man game, but with a small twist: you have the option of “capturing” your defeated robot enemies with a dash attack. The difficulty of each stage ramped up pretty quickly, and I found myself overwhelmed by robots, flame pits, and robots shooting flame pits in one of the levels before I died. 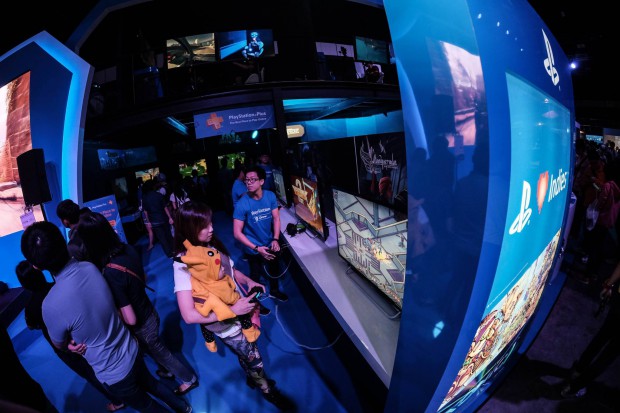 Street Fighter V took up the biggest space at the PlayStation booth with several stations set up for gamers to try out the beta, and tournament-quality joysticks were provided. You have to give props to Mad Catz and the organisers of the Capcom Pro Tour Asia booth for that. I even spotted an M. Bison cosplayer trying out the beta and I could see the exasperation on his face when he realised that Bison no longer has access to his Psycho Crusher as a special move.

Speaking of the PlayStation booth, it even had its own mini-stage this year where game previews would be demoed throughout the day. The most notable one was Uncharted 4, but unfortunately the preview level was identical to the reveal shown at this year’s E3. If you’ve already watched the E3 video on YouTube it’s exactly the same. But there was one glaring, entertaining difference. Victor Sullivan’s animation glitched out during the car chase sequence, and he suddenly decided to stand upright in the jeep throughout the chase. It was quite hilarious. 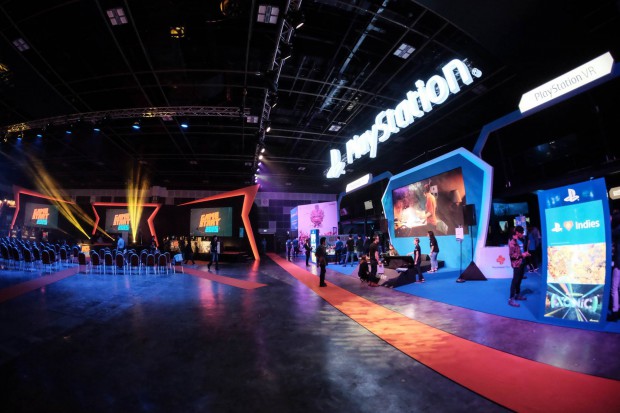 Overall the PlayStation stage was a great chance to showcase games to those who hadn’t seen it yet. But because it was located so close to the main GameStart stage, it was a bit difficult to listen to the audio at times.

The other big Sony attraction this year of course were the demo stations for their PlayStation VR (previously known as Project Morpheus) headset, located on the second storey of the PlayStation booth. This was the first time that the headset was available for preview in Southeast Asia. And unfortunately, you needed to pre-register for the demo beforehand, something that this boneheaded writer forgot to do. A couple of my other friends did manage to try it out and they were both impressed.

“The VR headset is more comfortable than Oculus Rift, it’s more accommodating for bespectacled people,” one of my friends said. 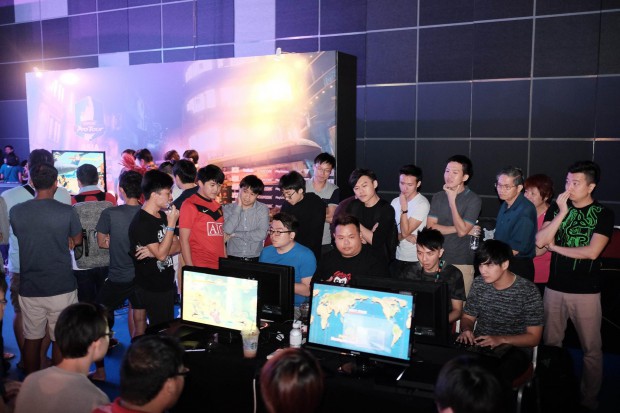 I also spent some time spectating Dark Souls III at Bandai Namco’s M18 booth. It felt like a typical Dark Souls game minus the swashbuckling improvements introduced by its cousin Bloodborne. You had to be patient, understand your moveset, and be alert at all times. My friend commented about how he had narrowly avoided a dragon’s breath that came from nowhere — had he charged forward recklessly he would have been incinerated. Yup, sounds like Dark Souls.

There were also other soon-to-be-released games by Bandai Namco like Just Cause 3, Gundam Extreme Versus Force for PS Vita, and Sword Art Online: Hollow Fragment Director’s Cut for PS3. I don’t know why Sword Art Online was inside the M18 booth. It’s classified as PEGI 12 in Europe for ages 12 and older. It would have made more sense to place it nearby outside the M18 booth to attract its target audience of teenage anime fans.

… But there were some dubiously disappointing booths 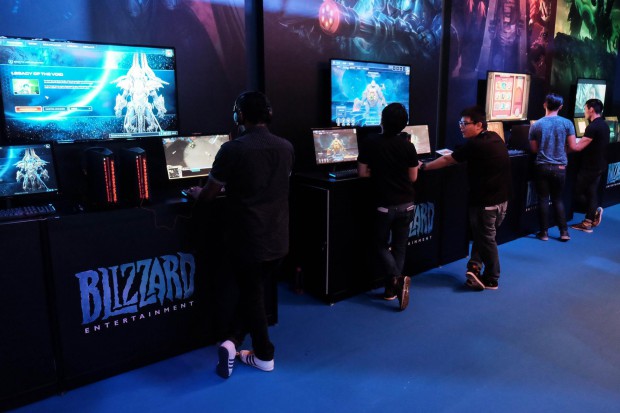 Blizzard Entertainment were back again this year with a slightly bigger booth. And once more, it was a bit disappointing. There were PC stations set up for Legacy of the Void, Hearthstone, and Heroes of the Storm. HotS players could win a coupon to unlock Cho’gall, an ultra-powerful hero recently added in an an update that requires two players to control.

Most Blizzard gamers were probably more interested in upcoming titles Overwatch and World of Warcraft: Legion. You could submit your email to sign up for a guaranteed beta invite to Legion, but that was it. I was secretly hopeful for the chance to try out Legion’s new Demon Hunter class at the Blizzard booth but that was perhaps asking too much of Blizzard SEA — BlizzCon 2015 had just taken place the week before. Still, the glaring lack of Overwatch at the booth was the biggest disappointment. It’s scheduled for a Q1 to Q2 2016 release and GameStart 2015 would have been the perfect event to tempt Blizzard fans with a preview or some sort of preorder offer. 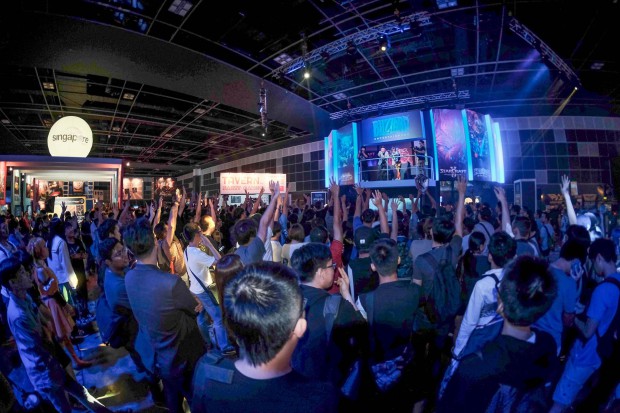 The White Elephant award for GameStart 2015 would probably go to the Deus Ex: Mankind Divided booth. It took me awhile to realise that this game was actually the sequel to Deus Ex: Human Evolution. But there was no representative at the booth, no fanfare, just one giant sofa and one giant screen to try out the game. It felt very empty and gave me a “wasted space” kind of vibe every time I walked past it.

This year’s GameStart had a much stronger Singapore presence, due to the prominent Singapore Game Box and Witching Hour Studios booths placed smack dab in the middle of the two halls. As a gamer who completely ignored the SG50 games made for our country’s 50th anniversary, I felt quite ashamed not to have tried them when they were released earlier this year, and seeing them at the Game Box booths made me more determined to play them now. They are absolutely free-to-play with no in-app purchases, so there’s no more excuses. 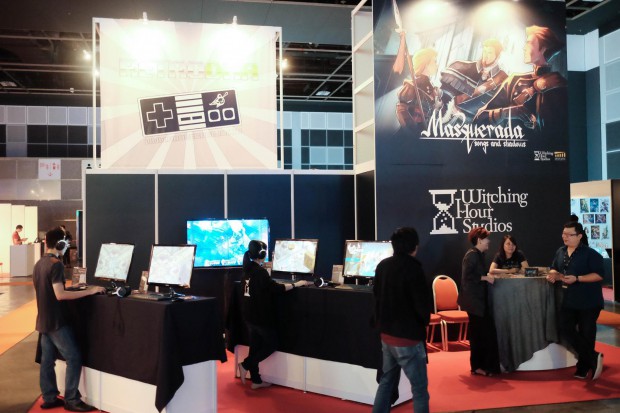 Witching Hour’s much revered turn-based RPG Masquerada: Songs and Shadows, which took home the Best Indie Game award at this year’s Tokyo Games Show, was playable at GameStart. I was quite awed by the high-quality sprites and cel-shaded engine, something you rarely see from a Singapore studio. I also instantly recognised the voice of Jennifer Hale while listening to the character dialogue.

In true Baldur’s Gate fashion you could pause the game with the space bar and issue commands to your party members, but I’ll admit that the combat in Masquerada felt a little bit messy, due to the lack of a combat log. There were damage numbers popping up over my enemies but I was unsure which one of my party members were dishing out that damage. As a fan of turn-based games, having access to precise combat data is an absolute must for my enjoyment and understanding of the game. To be fair, this was an alpha build and I really hope that this aspect would be improved for the final release. 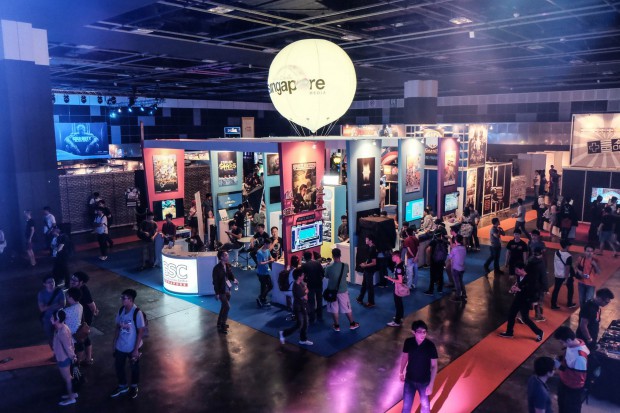 IMBA Interactive were back again with a bigger, far more imba-looking booth with accompanying musical instruments. There were also way more local indie booths this year, all clustered together near the back of the hall. One indie game that got my attention was Dice Soccer League by LambdaMu Games. As an avid football fan, this interesting hybrid of luck, dice, and the beautiful game really intrigued me. And then I discovered that the game was currently only available on iOS. It instantly broke this Android user’s heart. 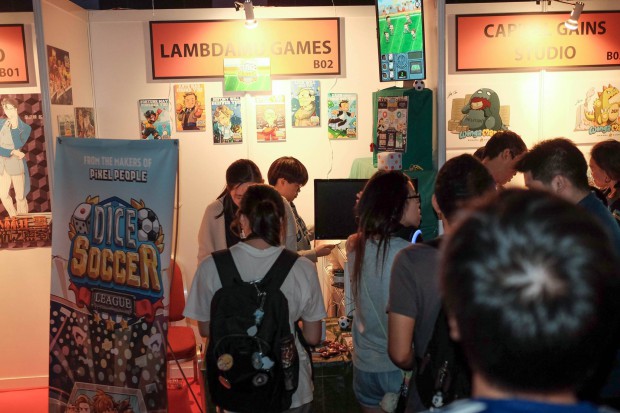 Ubisoft’s Rainbow Six Siege was demoed on the main GameStart stage on Saturday and Sunday by No Use Talking (NUT) and HBSgaming (Disclosure: the author is friends with two of HBS’ members). It was a punchy and entertaining exhibition by NUT and HBS, as both teams showcased the game’s different gadgets, classes, and fortifications. 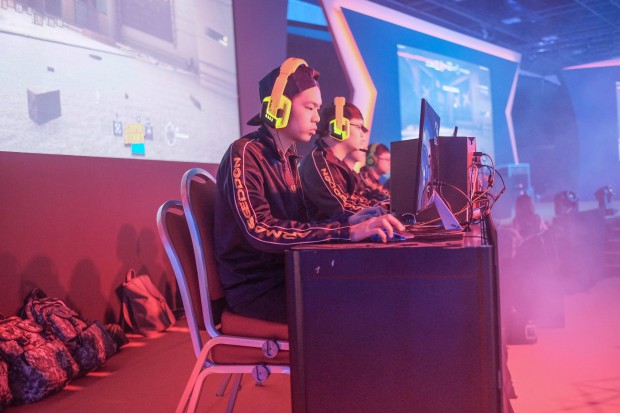 The huge variety of tactical options available to both teams and the pre-requisite teamwork required will surely help Siege to carve out its own niche from Call of Duty and Counter-Strike: Global Offensive’s more straightforward gameplay. Siege has successfully piqued my interest and might even fill in that team-versus Left 4 Dead void that Evolve has failed to conquer.

My only minor complaint was that the Siege demo was unavailable for GameStart attendees to try. Maybe invite a couple of members from the audience to team up with NUT and HBS for one of their matches? 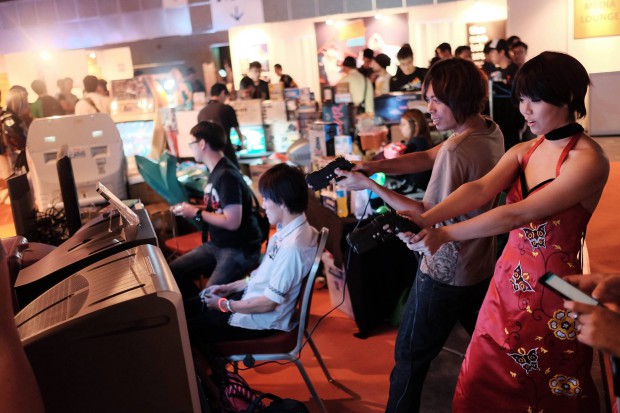 The best stage highlights were reserved for Sunday with the cosplay runway at 1pm and Street Fighter activities from 5pm onwards by Capcom. My sister, who doesn’t consider herself a gamer at all but decided to attend for fun on Sunday, was lamenting at the lack of Resident Evil cosplayers at GameStart. Very promptly, a great-looking Ada Wong cosplayer (in her Resident Evil 4 attire) appeared on stage during the runway event.

There was a lot more room this year in front of the GameStart stage, making it easier for everyone to gather around and snap good pictures without overcrowding. Even if you couldn’t attend all of the stage events you could still watch it live on GameStart’s Twitch channel. 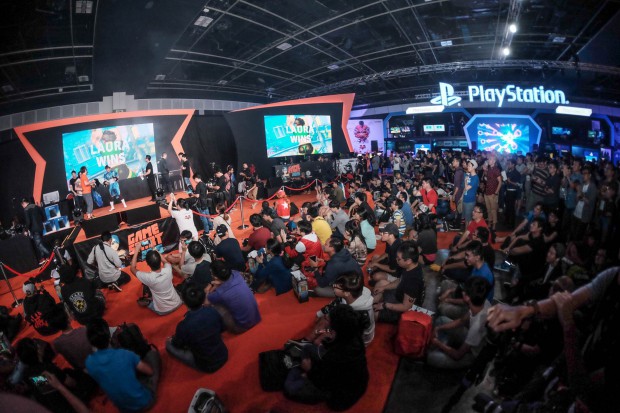 The finals of the Capcom Pro Tour Asia last-chance qualifiers was the big main event to bring Sunday to a close. Singapore’s Xian unfortunately, could not earn enough points to qualify for the finals and in the end it was South Korea’s Poongko (using Seth) who won the tournament after defeating Japan’s Nemo (using Rolento) convincingly. Capcom producer Yoshinori Ono was back in attendance to hand out prizes, and the Bison cosplayer I mentioned earlier managed to win himself a brand new PlayStation 4. It was Tuesday. 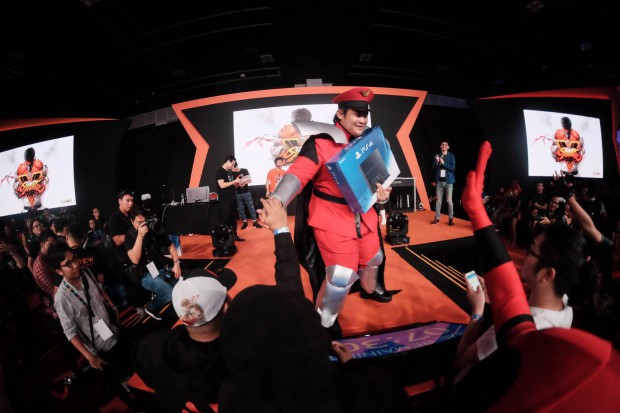 There’s just way too many games and activities at GameStart 2015 for me to mention in one article. I didn’t even talk about the Star Wars Battle Pod, the Dot Arena Masters competition, or the superb RetroDNA booth where I snagged an original, rare copy of Unreal Tournament for the Dreamcast for just S$10.

Last year Amos and I lamented about how GameStart 2014 needed to offer more stuff to do for future shows. This year, there really was a lot more. Every gamer, casual or hardcore, has different tastes and different gaming preferences, and GameStart 2015 had more stuff to cater to everyone. I was content with Battleborn and my sister was fangirling over Ada Wong. 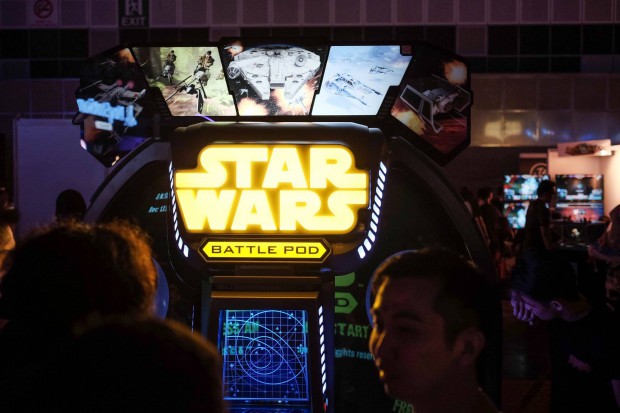 According to an official news post on the GameStart Asia website, there were 17,000+ attendees this year, an increase over last year’s 12,000. Better than 2014? Absolutely. Will I return for GameStart 2016? Of course. I really hope that the organisers will be able to convince Microsoft to attend this time. You can’t let the PlayStation fans have all the fun.

The author attended GameStart 2015 with a media pass but also purchased his own tickets for Saturday and Sunday to test the (non-existent) queue.

GameStart 2015: What we are most looking forward to

What we think about GameStart 2014: A good start, but it needs to offer more for future shows